If you want to stay longer than three months, yes you have to get a Visa.  Is it hard?  That depends.  Students can get a student Visa, workers get a worker’s Visa. Then there’s me! I’m retired and I just wanted to come live here.  So among other things, the French want to be very sure I could support myself.  They wanted to know I had my own health insurance and I had to prove I had an address to come to.  No sleeping rough!

Since I lived in the Bay Area, I made an appointment at my closest French Consulate: San Francisco.  On the website was a long list of things I needed to bring to the appointment with me…..in duplicate.  I was warned to do exactly as it said.  The French like to dot their Is and cross their Ts.

It went very smoothly.  A week later, My Visa arrived in the mail.  Along with a piece of paper telling me to send it in to a Paris address within three months of arriving in Paris. That led me to the Immigration Office (which I described last week) for a physical and tuberculous test.  Passing that, I was good until my year finished.

However, I realized after being here awhile that I loved living here and I wanted to stay. That meant I had to apply for a Titre de Sejour (a residency card).  At first the process was the same, make an appointment at the Prefecture (police) and bring in the list of things that were required…..in duplicate and translated into French.  By a certified French translator.  Everyone I knew said it was really hard.  I got terribly anxious.  I also got a lot of help.  I found a wonderful translator.  My appointment fell after the Visa had actually terminated.  I had visions of being thrown out of France.  Or not being allowed back in. 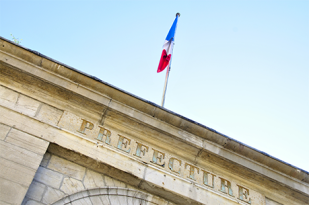 My day of the appointment arrived. It was hard.  The woman who looked at my documents looked at everything very closely over and over.  Then she finally wrote a list of things she wanted me to bring back for another appointment in about seven weeks.  Meanwhile she gave me a temporary card.  When that appointment came, she didn’t look at any of the documents she had asked for.  She told me to come back in two months to get my Titre de Sejour.  It turned out that almost every American I know was asked to return for a second appointment.  Maybe it’s a test of some sort

Recently I went to the Prefecture to renew my Titre de Sejour.  I came uber prepared but I still expected them to send me back for some reason.  They didn’t!  I was in and out in 45 minutes. And I get to stay in Paris another year!

My understanding is that the card must be renewed two more times if I decide to stay here. Then I can apply for a 10 year Titre de Sejour.

Photos are of actually docs but none are mine.