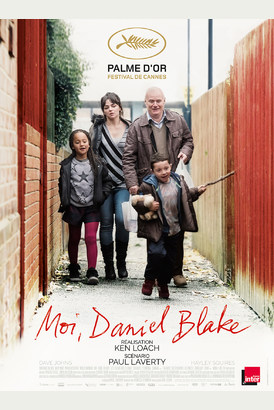 If you have ever walked by a homeless person and thought “There but for the Grace of God, go I”, go see I, Daniel Blake.

If you have ever listened to some of our well known politicians talk with utter contempt about the people using state systems to nefarious ends, go see I, Daniel Blake.

If you have ever felt complete powerlessness and building rage listening to Donald Trump talking about ‘those thieves and ingrates’ taking food out of his mouth, go see I, Daniel Blake.

When I lived in the Bay Area, at Christmas time, I would get about thirty dollars in one dollar bills and give them out to homeless people until I ran out.  I stopped doing it here in Paris.  I was warned that many kids, big and small, were run by Russians and Slave gangs and it was all a con.  Many of the homeless are very aggressive and can be scary.  Many seem to have their “spots” where they sit every day.  These spots are won by the strongest and the fittest.  There is a man with a german shepherd who sits in front of the Monoprix every day unless it is pouring rain.  I rationalized my lack of compassion by saying that I saw an SDF (Sans Domicile Fixe) pull out an expensive iPhone.  I didn’t stop to ask myself if I, even with my iPhone, would ever sit on the sidewalk all day, summer and winter, hoping that some kind soul would put money in my paper cup.

There is a moment in the film when Dave Johns, who plays Daniel Blake, says “all I want is my self-respect”

Ken Loach, the director, is 80 years old.  I, Daniel Blake won the Palme d’Or at the Cannes Film Festival this past summer.  It was his second Palme d’Or.  It is a film that will touch your soul.  Daniel Blake is a 59 year old carpenter who cannot work as he is healing from a heart attack.  He is fighting to keep his benefits.  He is treated like a dog by state agencies and the  people who work for them.  He is uneducated and never had the need to learn to use a computer.  He is told over and over that he can find the information he needs on the Internet.  He befriends a young woman (Haley Squires) whom he tries to help in one of these state agencies.  The friendship of two souls trying to work within the system, starving and slowly being humiliated is touching and real.  Everyone in the movie could be someone we know.  There is no flash, no extremes.

This is political filming at its best.  I challenge you to leave the theatre with dry eyes and unaffected.