Once I no longer HAD to read good literature, I joined a Book Club so that at least once a month I could say I had read Literature.  But for pure reading pleasure, I started my life-long love affair with Mysteries and Thrillers.  Some would say that there are plenty of mysteries that are also well written literature.  I’m not a judge.  I know that I love to while away the day lying on the couch reading Lee Childs, Alexander McCall Smith, John Sanford, PD James, etc.  All written in English by American or British authors.

I don’t know when I discovered that the French write mysteries!  At my Alliance Française, they are filed under Policiers.  Anne Trager, editor and translator, says the French call them Polar — pronounced “pole-ARE”.  Whatever they are called, I love them.  And thanks to Ms. Trager, I get to read them in English.  I’m not exactly proud that my french isn’t good enough to read these books but I’m making progress.  In the meantime, there’s

Anne Trager founded Le French Book in 2011.  Her website says:   “The company’s founder—American translator and editor Anne Trager—loves France so much she has lived there for over a quarter of a century, and just can’t seem to leave. It’s not the baguettes that keep her there (she’s sans gluten), but a uniquely French mix of pleasure seeking and creativity. Well, that and the wine. After over a quarter of a century of experience in the translation business and nearly as much in publishing, she decided it was time for her to focus on the books she loves to read and bring them to a broader audience.”

You can go to the website: https://www.lefrenchbook.com and discover all the books that she and her team have translated.  I want to tell you about one series in particular The Winemaker Detective Series by Jean-Pierre Alaux and Noël Balen.  I must have written Anne to thank her because I am now able to read advance copies of this series.  They aren’t quite The Cozies that some people steer clear of.  There is always a mystery and some are darker than others.  There is also plenty of wine as our hero ‘detective’, Benjamin, happens to be a renowned Wine Expert.  He and his assistant, Virgil, make the rounds of the vineyards of France, eating delicious meals, drinking fabulous wines and solving mysteries.  And, as with many series these days, one gets to know Benjamin’s family, Virgil’s love affairs and the state of wine production year after year.  The books are not lengthy so each one is an easy couple of afternoons reading.  Plus if you live in France as I do, it is so much fun to say “I’ve been there!” 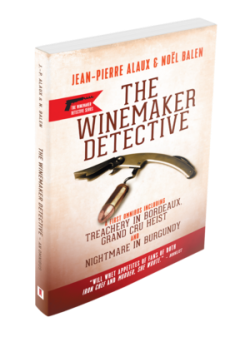 I wrote Anne last Spring and asked her if a TV series had ever been made of the books. Yes, she said, Blood of the Vine.  I subscribe to MhZ International Mysteries and found the series there.  I think I watched all four seasons in two weeks!  The series is loosely based on the books–once I got passed the fact that the shows were different, I fell in love with them also.

While writing this blog, I went on LeFrenchBook website and discovered that you can get 3 of the books free.  You just need to tell the team where to send them. Unless you only like violence that comes at you on every page, you will not be disappointed.