When I lived on rue Git-le-Coeur, in the 6th arrondissement, and looked out my window at the apartment building  across the small street, I rarely saw people in the apartments.  There was one apartment that was possibly an AirBnB.  It was rarely occupied and when it was, it didn’t seem that the same people returned there.  I asked my neighbor about this and she shook her head saying that housing is such a huge problem in Paris.  Very wealthy people, atmospherically wealthy people, buy up apartments on the top floors or ones with beautiful views and then they go empty for a large part of the year.  While down in working class people land, it is often impossible to find a good affordable apartment.  So while the view from my apartment encompassed the Pont Neuf, the Seine, les Bouquinistes, beautiful sunsets, it also looked on dark apartments.

Here in the 17th arrondissement, near Porte Maillot,  I look out on a working class apartment building.  It was probably built in the 50s or later, has 3 or 4 apartments on each floor facing me and I imagine the same number facing the opposite direction.  There are 7 floors.  Every apartment is full and has a story.  One of them recently had a fire.  The windows are gone, the terrace is black.  The terrace above it is also black but I’ve seen a woman moving around there.  For the first time in three weeks, I saw a crew come in to start cleaning up the rubble.  It looked temporarily like progress was being made.  At the end of the day, with the workers gone, it didn’t seem that anything had changed.

The irony is that I am in one of the beautiful old Haussemann buildings and I look out on modern thrown up architecture.  While they live in the modern apartments, probably don’t have the leaks and problems that these old buildings have and they get to look out on the lovely Haussemman architecture famous for it’s wrought iron balconies, long windows and a clean look for the exterior.  Agents will say “live in the modern apartments and look out at the old”  It does seem a smarter way to go.

Most of these elegant lodgings have large apartments with five, six or seven rooms.  Each apartment will own at least one Chamber de Bonne on the very top floor.  This is the servants quarters.  My little studio is two Chambres de Bonne with the middle wall knocked out so it has become a nice, small studio with kitchen and bath facilities.  A friend recently told me that smart real estate investors are buying these rooms up as fast as they can, doing minimal amount of upkeep and then renting them to students who don’t mind the size and may even have romantic notions of the garret apartment/studio in Paris.  In a short time, those investors become very rich.  They can charge anywhere from 600-900 euros for a small space.  A law has been passed that no one may rent a space that is under 10m2.

It’s hot these days, so I often am leaning out the window looking at the life going on down below me and across me.  One man comes home from work, turns on the tele and doesn’t stop watching till midnight.  Three floors below him live a very old couple.  On one these nice mornings, I watched as he joined her for a small breakfast out on their balcony.  On the same level but at the other end, an elderly man comes out twice a week with his watering can and waters his very petite jardin.  I haven’t seen color there only green plants.  He is clearly fond of them! 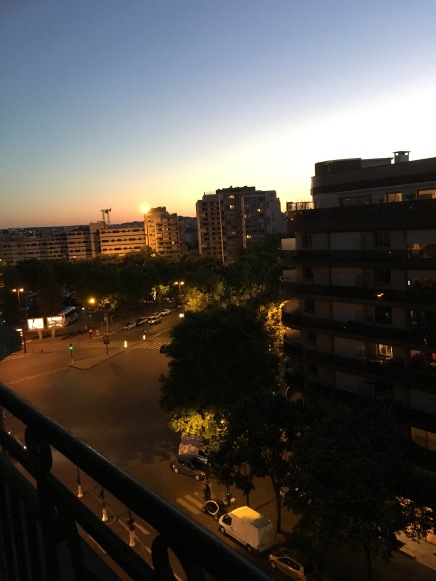 It is getting hotter and hotter as the days pass and life will take place on the terraces more than inside the apartments.  Down in the street when it’s this hot, there is always noise: police sirens, motorcycles, loud voices made louder by rising 8 stories, more police sirens.  The sun doesn’t disappear until 10:30pm and since the majority of apartments are small, life takes place on the streets, in the cafes and bistros for most people.  And in spite of all the terrorism threats, tourists still arrive daily for the summer months.

The Palais des Congres is across the street in the other direction.  It’s connected to a Hyatt hotel.  There are conventions there every week, huge conventions.  So the markets and stores in that area are kept open late and on Sundays.  The metro #1 goes through Porte Maillot on it’s way to La Defense.  The #1 is one of two metros in Paris that is not run on human power but electric.  So it runs even when there is a strike.  It is very convenient.  I can take the #1 and change to go most anywhere.

The 17th arrondissement is out on the edge of Paris, behind the Arc de Triomphe.  The peripherique, the ring road that circles Paris and encloses it, is the next “street” over.  Past that, I would be in the suburbs.  I feel the distance from where I used to live.  I’m getting used to this area and coming to like it but the Paris I love is more in the center along the Seine–where the magic is!

2 thoughts on “Learning the 17th arrondissement”