While I was in the United States, January through May, Bijou was living the life of Riley.  She stayed with a friend who has quite a large apartment, consisting of three large bedrooms, a living room plus and a dining room plus.  Bijou had the run of the place.  And she literally could run in a circle going through almost every room.  She loved hiding under my friend’s bed, she would go to sleep on the kids’ book bags, she would sit on the back of a sofa for hours making those funny kitty noises every time she saw a bird and she made herself at home wherever she could.  She knew she was only a guest and never jumped up on a table or workspace as she did at my apartment.

Once Spring came, things started to get a bit dicey.  The apartment is on the 6th floor.  Each room has a minimum of two ceiling almost to the floor windows.  And every window had a little balcony where healthy plants were waiting for the sun. The windows would be thrown open and Bijou, with tons of cat curiosity, would go exploring.  Just sitting on the little balcony was not enough.  She would jump up on the railing and when any of the family walked by, she would just look innocent.  While the family member had a small heart attack terrified Bijou would fall to the pavement and use up all her nine lives at once. 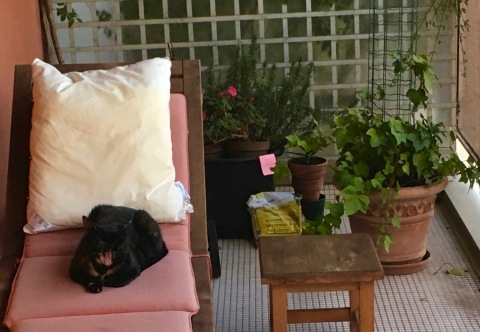 One very hot in July night, my friend decided to leave all the windows open.  She could see that Bijou was near the balcony but opted for taking care of herself first. The next morning, when she called Bijou, Bijou was nowhere to be found.  She went looking everywhere and, after an hour, she was formulating a conversation with me to tell me that Bijou had disappeared.  Just as she picked up her phone, she saw Bijou looking pathetic outside her son’s window.  That window was not open the night before.  Neither of us even wanted to think how Bijou managed to get to that balcony from the opposite side.

When I finally moved into my own apartment in early August, I came and got Bijou and, for the first time in eight months, we were living together.  I have a large terrace with a railing.  The top of the railing is 4″/10cm thick.  I’m on the 7th floor.  Each room has glass doors that open up on the south side of my building and it is necessary in warm weather to have them open.  Bijou loves the terrace and spends a lot of her time there.  At first, she would jump up on the railing and I was the one having a heart attack.  If I screamed or did something panicky, I was afraid I would scare her and she’d fall.  I would clap my hands very loud which has always been my signal to her that said “No”.  She would jump down.  As soon as I went inside, she’d jump up again and nonchalantly go walking over to the next door neighbor’s apartment.

Bijou always comes when I call her.  She is basically a very good cat.  She is learning not to jump up on the railing and does it rarely now.  I’m still too nervous to leave the doors to the balcony open in the night when I’m sleeping or when I leave the apartment.  I don’t know why.  I truly don’t think anything would happen to her.  Cats have such an innate sense of balance and perspective of distance.  But……I don’t ever want to be in the position of saying “If only…..If only I’d done the right thing”  So doors stay closed at night, open during the day. Sara, the police, periodically wanders the apartment looking for any cat trouble Bijou may have gotten in.

Bijou, who was bought off the streets of Paris 2 1/2 years ago, has grown into a sweet cat. I’m completely aware that the catcapades she gets into are completely in line with her job description.  She also likes to be in the same room as people.  She likes to sleep at the foot of the bed.  When she was very little she discovered a teddy bear of mine and to this day treats the bear like the mother she never had.  She will walk up slowly, sniff it then realizing it is mama bear, she will start kneeding the bear and collapse in pleasure while her front paws go in and out of the bears tummy.  I’m always so grateful it’s not my tummy.  My friend, Fatiha, adores Bijou and makes her toys out of whatever she finds lying around.  She gets Bijou to jump 4 feet high then teases her by pretending to throw a ball.  Bijou doesn’t care.  She adores Fatiha back and if Fatiha wants to play, that’s what Bijou will do.

And now you are caught up with the adventures of the fur ball living with me!!!

One thought on “The further adventures of Bijou, the cat”