Two books have come to my attention lately.  Both are about a boy growing up below the poverty line and getting far enough away to write about it.  Hillbilly Elegy by JD Vance is his chronicle of being raised by an alcoholic mother and his grandparents in Appalachia. The blurb on the front of the book says it is a ‘must read’ in order to understand Trump’s America.  The End of Eddy (En finir avec Eddy Belleguele) by Edouard Louis is the memoir/novel of a young man growing up gay in Hallencourt, France and “has sparked debate on social inequality, sexuality and violence.” Quote from the back of the English translation. 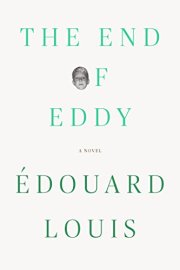 My book group chose Hillbilly Elegy as the January book.  I don’t think anyone in the group accused it of being good writing.  However, most of us thought of it as extremely educational.  I, personally, am one of those people who has been going around confused and baffled as to how Trump won the presidency.  Russian collusion aside, what was his appeal?  He was clearly a liar, a womaniser and a supremicist.  Yet, when those who voted for him were asked why, they said “We know he is all of those things but he speaks for us and we are willing to overlook those details”  Vance’s book helped me to understand who those people are and why they hated Obama not to mention liberal white people like me.  Trump’s way of talking and being wasn’t offensive because that is the way most everyone in Appalachia and working class White American talks. 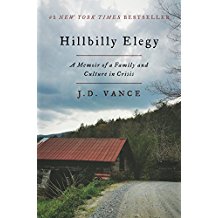 Reading Hillbilly Elegy was an easy read.  I never felt brought into his world but I got to know the people in his world.  He described it–one in which the violence of his grandmother and the Marines in which he enlisted  between HS and College made a man of him, gave him the strength to leave Kentucky and Ohio and make something of himself.  He loved his violent Grandma.  I cringed when he described incidents with her.

I discovered The End of Eddy because I went to a talk at the Mona Bismarck Centre on Quai New York.  Mr. Louis was interviewed by a Princeton PhD as to who he was/is and how this book came to be written.  Louis is a very appealing young man and a treat to listen to.  His English is excellent–not only his command of words but his ability to express his deeper thoughts.  I wished so much my french was good enough to read this book in French but feel grateful that I can read it in English.

Louis has nothing good to say about his childhood.  The violence he suffered was also supposed to make a man out of him.  But he was gay and effeminate from a very young age.  He was beaten and spat on as a matter of course almost every day of his young life.  His suffering was such that it has become the nugget that his books revolve around.  The writing is so eloquent that the reader suffers with Eddy, feels the spit running down his face and cringes when the father or older brother are near.  Yet, there is no self-pity, no recriminations.  In fact, listening to Louis, I was struck by his generosity of spirit toward everyone.  Although there is no excuse for violence he said, he understands that everyone is suffering.

I’ve never met J.D. Vance.  Maybe he would touch me in the way that Louis did.  But I suspect not.  But that is not his intention for his readers.  He wanted to tell us, the rest of America “This is the America you don’t see and don’t understand.”  In 2016, Vance quit his job as investment banker, moved back to Ohio and is considering a run for Senate as a Republican.  He is quite conservative.  Louis’ intention is to get a conversation going.  We live in such a violent world that we don’t even recognise it.  Talk about it, tell your story, educate yourself.

Vance’s childhood home voted for Trump.  Louis’s town of Hallencourt voted overwhelmingly for Marine Le Pen.  Vance has gone right.  Louis has gone left.  Two boys, two prisons almost impossible to get out of and two very different directions. ‘For Louis, the tide of populism sweeping Europe and the United States is a consequence of what he, citing the sociologist Pierre Bourdieu, calls “the principle of the conservation of violence.” “When you’re subjected to endless violence, in every situation, every moment of your life,” Louis told an interviewer, referring to the indignities of poverty, “you end up reproducing it against others, in other situations, by other means.”’  (Garth Greenwell, The New Yorker, May 8, 2017)

Read them both.  Leave me a comment.  I’d love to hear what readers are touched by and think of both books.