Sunday morning, the morning after setting our clocks forward.  Of course, I slept too late.  But as it turned out, we had the perfect day to look forward to.  The sun was out, it was warm and we were headed to the water and Ile de Nantes.

Ile de Nantes is somewhat like Ile de la Cite in Paris.  The Loire river divides in two and goes around a large tract of land.  Much of the old shipping and slave trade took place on the island.  The shipping yards closed in 1987.  Slave trade doesn’t exist anymore (there is a wonderful museum recounting the years that Nantes led Europe in slave boats that left this continent.  We didn’t have time to go but it’s on our list for next time).  Now there is a large park, Parc des Chantiers, and the fabulous Machines de l’ile.  A Parisian friend had told me to be sure to see the machines that look like animals.  That is all she said.  A bit of an understatement!!!  Nantes is the home of Jules Verne so it probably shouldn’t come as any great surprise to see wondrous creations out of all sorts of material.  As we crossed the bridge, we saw the Carrousel des Mondes Marin–“a universe of strange and disturbing marine creatures which revolve in a huge three level structure” -Tourist brochure. 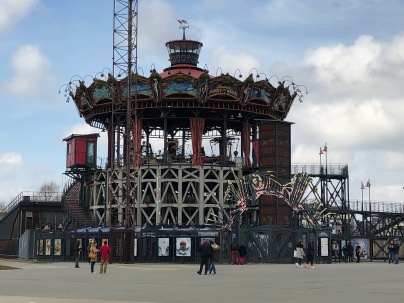 I wanted to see the Grand Elephant first.  I love elephants, for many reasons, and one doesn’t get to see many outside of Stomper, the mascot of the Oakland Athletics baseball team.  We wandered towards the gift shop and suddenly there it was before me: A majestic animal of steel and wood, 40 feet high, 26 feet wide and 21 feet long weighing in at 48.4 metric tons.  I literally gasped.  It looks like a real elephant.  When it goes for a walk, it is “architecture in motion”-tourist guide.  The trunk can blow like a trumpet and shoots water at a great distance.  It seems to use the water to get children to move out of the way of it’s movement.  It would not be fun to be stomped on by one of those huge feet.  I took photos and videos and smiled like a kid.  The eyes looked real and seemed to be looking at me as I walked backwards trying to get the best shots.  I had wanted to take a ride but there was a line and I had so much fun just watching the elephant stroll.

We did buy tickets for the Carrousel, which opened in 2012, and went to all three levels to pick the marine animal we wanted to ride.  Of course, we weren’t nearly quick enough.  Children were fast and found their favourites. I chose the tortoise.  I had to climb up tiny little stairs and swing my aging knees on either side of a saddle. The turtle was made of steel and had four distinct parts: the body that I was sitting on, the head that I could swing back and forth with a handle and two side handles that moved the front legs.  By the time I figured out how to make the tortoise look like a live being, the ride was over!  In front of me were two flying fish each one built out of a bicycle.  Next to me were two giant horses pulling a carriage that held a family.  Barbara rode a giant snail.  She was sad because she wanted the horses.  They rode up and down – about the only things that moved similar to the carousels you and I are familiar with.

Even after the ride was over, it was hard to leave.  The park is an extraordinary creation.  It was founded by Francois Delaroziere and Pierre Orefice.  they are major figures in Street theatre and urban performance in Europe.  Today, Pierre Orefice is the director of Les Machines de l’Ile.  Francois is the art director of the company Les Machines and dreams up live performances.  The structures are built in the workshop before the public’s eyes.  The Machines first opened in 2007 and have given thousands of people, old and young, a great deal of pleasure.  Go see it! 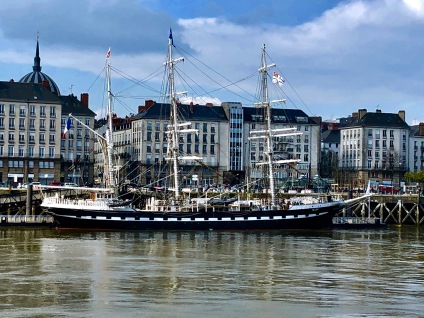 Across from L’Ile de Nantes sat the Belem, originally a merchant ship and now berthed for all to see on the Quai des Fosses.  Right behind the Belem was a 40 foot sailing boat that belongs to Antoine and Marion, friends of Barbara’s oldest son, Mathieu.  They are getting ready to leave on afive year trip around the world.  They invited us on and into the cabin of their boat for a coffee.  Marion showed us where she is renovating the ceiling with wood which she will then paint.  Antoine was working the outside.  I asked them if all this had to be finished before they left.  They said the proverbial answer: it is a work in progress!!

I applauded them their courage to do a trip like this before they start building careers and a family.  I also took a couple of years off between university and Graduate School and hitchhiked around Europe.  My parents thought I was crazy and it’s true that it is a luxury to be able to take off like that.  Not everyone can.  I have never regretted it.

We left in time to get ready for our final adventure of the day: dinner at La Cigale.  Our AirBnB host had told us not to miss it.  It is Art Nouveau at it’s most extreme.  Barbara had made a reservation when she was told she couldn’t have her birthday dinner there.  La Cigale was built by Emilie Libaudiere and opened in 1895.  It quickly became the place to meet and greet for the bourgeoisie, aristocracy, dancers and actors.  It is now an historical monument.  In 1961, it was chosen as the film set of ‘Lola’ by Jacques Demy.

We walked in and were seated near a window looking out on the Cours Cambronne, a beautiful terraced walkway.  We quickly ordered then both of us were up taking photos of everything.  The waiters didn’t blink an eye.  They must be terribly bored of seeing all the tourists repeating the same things over and over again day after day.  But it is an eyeful.  Tiles everywhere of cigales and family shields and basic blue and yellow strips.  An old wooden standing clock perched on the bar and was topped with a Cigale.  The Cigale is good luck in Provence but has brought it’s luck to this restaurant. 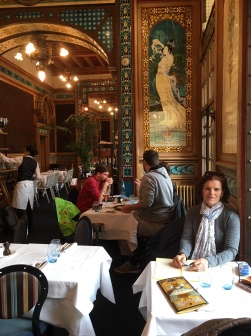 We ordered cabillaud again and bar and grilled vegetables.  It was good but so was my dinner that I’d cooked the night before!!  But I couldn’t top the atmosphere of fun at La Cigale.  When we left, we walked to Place Royal and were able to see it without the stalls. A centre fountain was bathed in blue light and again, I thought of Rome. 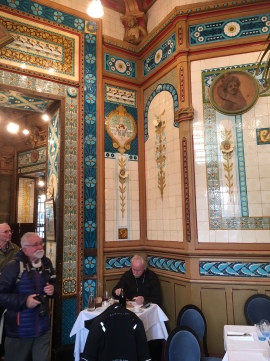 The next morning, we went full circle.  We walked back to the Chateau and strolled along the ramparts getting a good view of the city.  It was impossible for me to imagine what the scenery would have looked like in the 15th century and what a person standing on the ramparts would look out on.  As we came down into the Courtyard, Barbara realised that with all the photos we’d taken, we had none of the two of us together.  So, in French, she asked a woman who was sitting next to us to do the honours.  “I am English and would be happy to take your photo!”

With that, we went to get our suitcases and take the bus to Gare de Nantes.  Two and a half hours later, we arrived at Gare Montparnasse.  For me, I love to visit everywhere in France and I love coming home.

After you hear the elephant roar, turn the sound down, it’s a poor choice of background.

2 thoughts on “A birthday in Nantes–Part 2”