My guidebook Insight Guides: Southwest France, that I read before coming down to Pouy, described Condom first as a name bizarre to English speakers.  The name is thought to be derived from the word Condominum–land ruled by 1st-century Vascons (later Gascons).  It concluded saying the town had accepted the inevitable and greets tourists every summer with an expo on contraceptives!  This is no longer true.  Thank goodness!

Condom is the town closest to me and where I have gone for my shopping.  There is a BioCoop to satisfy my vegetarian needs and plenty of fresh fruits and vegetables everywhere.  Many of the farms near here open up as a store one day a week and sell their goods straight from the vine, so to speak. 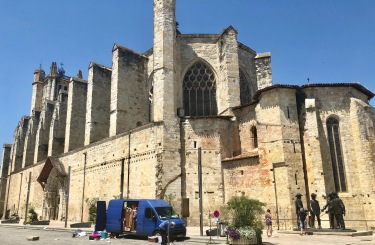 The centre square fronts the Cathedrale St-Pierre, rebuilt in the 16th century on the ruins of an 11th century abbey.  In front of the Cathedrale is a statue of the four musketeers.  D’Artagnan was a real person born near Lupiac in 1613.  His story was made famous in the adventure novel by Alexandre Dumas and, I’m told, there have been no less than 25 film versions of the book!  Lupiac is southwest of Condom, west of Auch, and may be a visit when my friends come down next week.  In the Centre d’Artagnan, the exciting story of the Gascon hero can be found.  Something I think I’d enjoy immensely.

Condom seems to be the crossroads for many of the villages I want to see.  Larressingle is about 10 km west of Condom and called “the little Carcassonne” by some.  It is a fortified village with it’s 13th century walls intact.  I bought a book on Larressingle and the author concluded that the walls have stayed intact because it was too small to be an important village and was often left alone when fights between the Gauls and the Romans broke out as they so often did.  Along with Fourcès, Montreal and Lavardans (all short drives from Condom), Larressingle is listed  as one of the most beautiful villages in France.

From the parking lot in Larressingle, I took a 5km hike that circled the fields that surround the town.  Even though it was hot, much of the walk was in shade and delightful.  It was on this hike that I found myself on GR65, the Chemin de Saint Jacques de Compostelle.  A sign welcomed me as a pilgrim and a hiker! 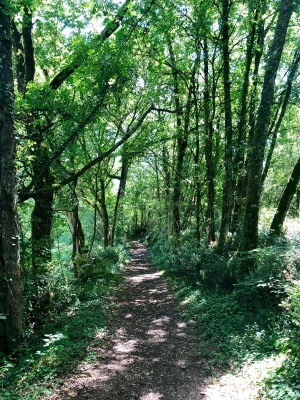 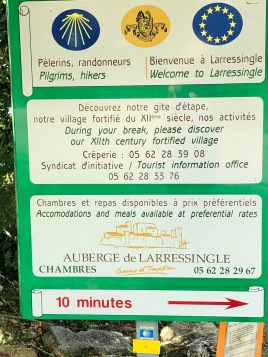 Fourcès, a village 10 km north of Larressingle, is famous for its main square  which is, in fact, a circle.  Guidebooks say it is the only village that has all it’s establishments surrounding the centre park and benches.  There is a circular covered walkway for one to keep cool.  I met two store owners.  One was so delightful.  She clearly loves her village and when she saw my interest directed me to a book by Perry Taylor called Le Selfie Gascon.  This is the third book by the British artist (watercolour) and honorary Gasconian (is that a word?). It is full of wit and a deep understanding of the Gascon personality.  Of course, I had to buy a copy. 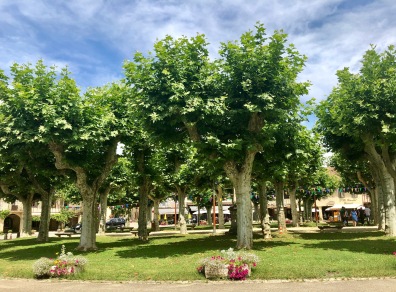 My friends who own the home I’m in had suggested I go to a Fête on the other side of Condom in Caussens.  A friend of hers, a photographer, was selling her work and she thought I’d be interested.  So I made my way through Condom, which takes all of 5 minutes, and had to go through the small village of Caussens to find Au Vieux Pressoir, an auberge that had transformed itself into a local Fête for the weekend.  It was not easy to find! I persevered on a long very narrow road praying the whole time that no car or truck would come in the opposite direction. I discovered a lovely restaurant and hotel on beautiful grounds.  All the locals were probably there.  Everyone seemed to know each other and were having a great time dancing to live music and eating Gascon food.  I found Sallie Erickson at the very back of the property.  She congratulated me on sticking to my guns and finding not only her but the Auberge.  I think it would be safe to say that I was the only ‘visitor’ there.  Wagons full of kids pulled by horses clippity clopped by me.  One of the women I met there told me that the owners rescue horses that are to be killed when they are no longer useful.  This is the second place of it’s kind that rescues animals from early death and lets them roam on lots of land.  The first was near Giverny where I was 6 weeks ago. 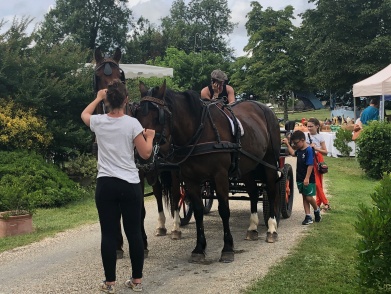 Fleurance is southeast of Condom.  I had heard there was a lively market there and I wanted to see for myself.  I got there late for a market, around 11am, but it was still difficult to find parking.  Having turned half French, I no longer mind having to walk a half-mile to get to where I’m going!  The market took up four or five streets maybe more and included a covered space surrounded by arches under which we all walked.  One could find pretty much anything you were looking for. Maybe not the kitchen sink but I could be wrong.  Much was junk, much was the regular tourist fare which I like but have enough of and a minority of tables had fresh vegetables, fruits, honey, etc.  I could tell by the dirt the food had come straight from the farm. 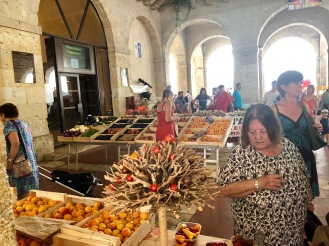 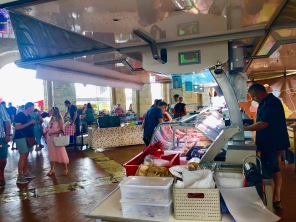 This area I’m sure is one of the few places left where things don’t say Bio.  Everything is so fresh and grown locally that the word Bio is redundant.

For more information on Perry Taylor, his books and drawings:      http://perrytaylor.fr/en/

For more info on the Auberge:  https://www.auvieuxpressoir.com

For more information on Sallie Erichson, her Gite on the Chemin de St.Jacques and to see her photography:   https://www.gite.com/chapelle-roses