When I wrote about le Chemin de St. Jacques that starts in Le Puy and works it way down France to Lectoure and west to Condom and Montreal, I was fascinated by a big detour.  As the Way goes west from Lectoure, it suddenly goes due north 8 kilometres to the  Collegial of La Romieu and then back down 8 kilometres and makes it way to Condom.  La Romieu had to be something very special to the pilgrims.  I learned it is classed as a World Humanity site by UNESCO. 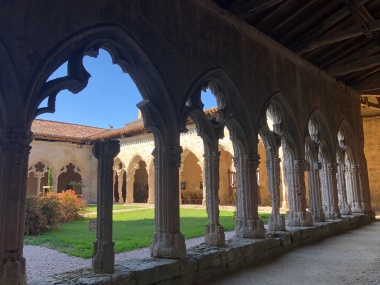 The Village itself was founded by two Benedictine monks on their return to Rome in 1062.  The word Romiau means Roman pilgrim.  Later, Cardinal Arnaud d’Aux wanted to build a Church that would be the tomb for his family.  Today, Le Romieu hosts a beautiful church, Sacristy with painted ceilings, Cloisters and a tower.  From the top, on a clear day, one can see the Pyrenees. 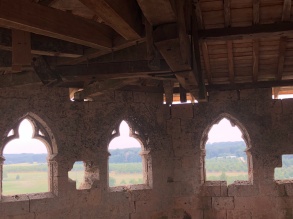 What charmed me was the story of Angeline and her cats.  The short version is that during the middle ages, the people in the village were starving and took to eating cats and dogs.  The child, Angeline, hid her two cats.  When the time of starvation passed, the rats came.  Angeline’s cats killed the rats and saved the village.  We ate at a restaurant called Angeline’s.  Everywhere you walked, a stone cat or fascimile would be gazing into the distance. 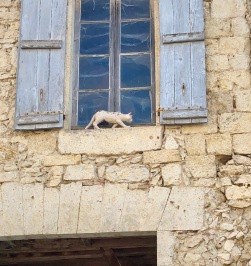 Driving up to Le Romieu, one sees two towers not one rising into the sky on either side of the Collegiale.  It is a magnificent skyline.  In July, a music festival and Fete is held on a long weekend called Festival Musique en Chemin. 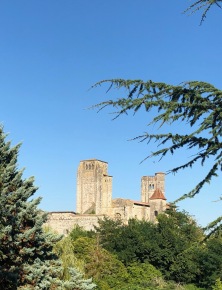 My ticket to Le Romieu gave me access to Les Jardins de Coursiana, a 900 meter walk from the village.  The Botanical gardens are actually four different gardens: an English garden, a medicinal garden, a huge vegetable garden (plenty of vegetables were on sale in the Boutique), and a Potager 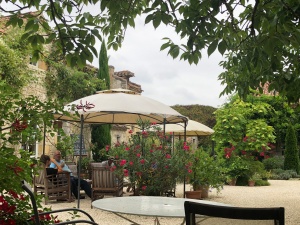 Entering a well loved garden has always given me a deep sense of peace, much more so than many churches and cathedrals that I have visited. These gardens were created in 1974 by Gilbert Cours -Darne, an eminent French botanist (he was awarded the Olivier de Serres prize, the highest distinction bestowed by the Academie d’Agriculture), the arboretum occupies 6 hectares and contains 700 different species of trees and shrubs. Situated by the road to Saint-Jacques de Compostelle with a view of the St Pierre de La Romieu collegiale, the Coursiana Gardens offer you a serene pause in a beautiful environment. Veronique and Arnaud Delannoy, the owners of the arboretum, as a result of their painstaking work, received the national Edouard d’Avdeew’s prize, awarded by the Association des Parcs Botaniques de France. In 2001, a partnership was established with Fleurance Nature to create a medicinal and aromatic plants garden, which opened in spring 2002. (most of this from TripAdvisor).

Some reviews say “Come in May”.  During the first two weeks in August, I saw: Wisteria shading lilac plants, large orange marigolds protecting long rows of tomatoes, green beans and aubergines.  Next to a lake with two swans and 3 ducks, rose an Oak tree that had been planted two hundred years ago.  It towered majestically over the rest of the many trees nearby.  It’s branches, in almost a perfect circle hung canopy-like over the bottom of a Japanese Fountain and waterfall.  Hanging to the sides of the lake were the largest Hibiscus plants I have ever seen. 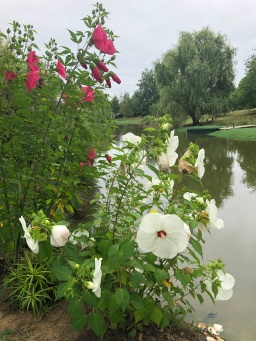 The brochure says it takes 1.5 hours to walk the gardens.  That’s a rush for me.  I wanted to sit on many of the wooden benches strategically placed for contemplation.  The gardens were very quiet.  Visitors seem to respect the deep spiritual sense of beauty that the gardens instil. 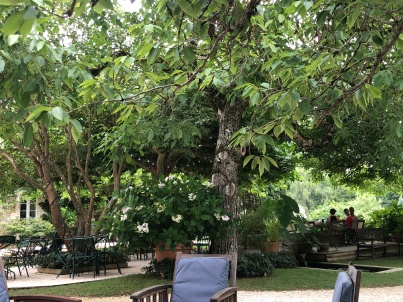 A couple of days later, with only one day left in Le Gers, we visited L’Abbaye de Flaran.  It  is a former Cistercian abbey located in Valence-sur-Baïse, The abbey was founded in 1151, as a daughter house of Escaladieu Abbey, at the confluence of the Auloue and Baïse rivers, between the towns of Condom and Auch. The abbey was founded by Burgundian monks and today represents one of the best preserved abbeys in the south-west of France. (Wikipedia) 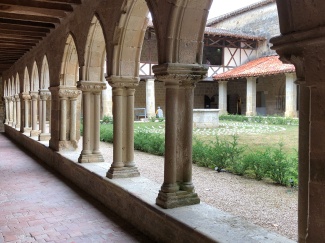 After years of tumult, almost being sold off and ending up in the Metropolitan Museum in New York, the site was purchased by the department of Gers in 1972 and underwent an intense restoration project; it is now the site of numerous cultural activities. The site houses a permanent exhibition on the pilgrimage route to Santiago de Compostela, the Way of St. James.

At the turn of the Century, Michael Simonow donated all his art collection to the Abbey.  They have been showing exhibitions every since.  The one we saw on the First floor looking over the Cloisters was called The English School.  It was a lovely exhibition but…it gave the Abbey a feel of a museum.  Downstairs is the permanent exhibition of Les Chemins de St. Jacques.  Entering that stone room with two stone sculptures of what Jacques must have looked like, I was immediately transported back to the spiritual feelings this being (me) almost automatically soaks up when near this Way.  A bit like being wrapped up in a light shawl.   I am so looking forward to starting on Le chemin next summer.  I don’t even care about getting to Spain.  Just being around it, so close to it for over a month, has given me a great feeling of longing to walk on the path that so many pilgrims have walked on. I even talked a fish market into giving me a half shell of a  Scallop to place in my small terrace garden.

To learn more about any of these places, go to…