Until five months ago, I had never heard of Ta-Nehisi Coates. I started seeing ads for his latest book We Were Eight Years in Power on my digital version of The New Yorker. Last week, I was sent an advance copy of the book to review (it hit bookstores on October 7th but I received an unedited version) and my world turned upside down.

This is not a scholarly review.  This is a review of a citizen of the United States living in Paris trying to understand how and why Trump happened. 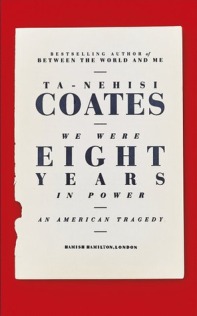 The book consists of eight essays that Coates wrote for the Atlantic where he is now a Senior Editor. Each essay represents one year that Barak Obama was President. He prefaces each one with a present day writing telling us specifics of why he wrote what he wrote and how he sees the article now, 2017. He ends with an Epilogue about President Trump “our first white president”. The Guardian review calls him “the laureate of black lives”.

I am a seventy year old white woman living in Paris, France. I was raised in academia, my father taught at Princeton University. I say that I was released from behind Ivy League walls at eighteen years old a very naive young woman. I have always considered myself a liberal (my sister says that is a four letter word) and always voted Democrat. Never have I felt more naive and uneducated about the realities of the class system in the United States than reading Coate’s book.

Coates has a unique way of presenting his material in a New Yorker-type style while searing you with some very unpleasant truths. Truths that, the minute I read them, I knew were true though I’ve had my head in the sand for a long time. The Guardian says “Coates has the rare ability to express (it) in clear prose that combines historical scholarship with personal experience of being black in today’s America.” He calls all types of slavery, the Klu Klux Klan, White Supremacy ‘Domestic Terrorism’ which, of course, it is. Slavery was outlawed over 150 years ago, Blacks have the right to vote and the Civil Rights movement, of which I partook, was supposed to have ended all the inequality. Yet Blacks are consistently murdered and the murderers not indicted. Laws have been passed to stop Blacks from voting at the polls. Coates probably sited 100 instances of domestic terrorism. Some I knew about, many I did not. All done in the name of keeping the White class the superior class.

His eighth chapter was specifically about Obama. What made Obama unique and able to become President of the United States was the fact that he was raised by three white people who adored him and let him know how much he was loved. He was not educated to be suspicious of white people. He was not cautioned about going into certain neighborhoods that were too dangerous for black people. He was encouraged to learn and encouraged to strive for the best. Coates stated that 71% of Republicans still believe he is Muslim and many still believe he was not born in the United States. Trump began his political career by openly challenging Obama to produce his birth certificate. For years, he stated everywhere he could be heard his “Birther” beliefs. Obama was our first black president. However, if he was not born in the US, then he couldn’t be president and for the majority of people who are threatened by the idea of a black president, the string of white presidents remains unbroken.

I couldn’t put Coate’s book down. I learned that he was a fellow at the American Library in Paris where he wrote parts of his last book “Between the World and Me” I didn’t join the Library until after he had left France and want to turn back the clock. I feel cheated. I have watched his interviews on YouTube and his presentations at ALP. He seems a soft spoken man who is very funny and still a bit overwhelmed by his fame. He told Chris Jackson, his editor and publisher of One World books, that it felt like being hit by a Mack Truck. A Mack Truck with money but still a Mack Truck!

Coates is a man who has a lot to be angry about. But he has chosen to channel that energy into educating people like me about “Reality”. He is not surprised by a Trump presidency. I was. We Were Eight Years in Power felt like a fist to my gut. It hurt. I needed the painful punch. I didn’t choose what color my skin is anymore than Coates did. I have been fortunate. A whole class of my compatriots have not been.