Before Banya was attacked by a raccoon, she was already overweight but she moved around rather spritely, going indoors and outdoors as she pleased.  Then, three summers ago, I went out of town and a family stayed at my home in Oakland.  For some reason, that I’ve never been able to figure out except that they must not like animals, they put Banya and her food outside on the deck.  In California.  Where wildlife is in everyone’s backyard. Five days later they called me to say Banya was hurt.  I had a friend go get her and take her to the Vet.  She had maggots growing in a huge wound.  The only reason she wasn’t dead was that the raccoon bit her around her spine.  Her spine protected her organs.  I’ve never forgiven myself for that happening. 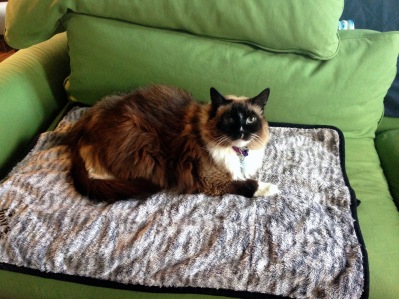 So I brought Banya to Paris.  I thought I was the most trustworthy person for her to be with.  She was and is a real trooper.  She flew in cargo and when I picked her up, she looked quite pleased with herself.  In Paris, Banya became an indoor cat. She became a city cat having to get used to city noises that she had never heard before.  She hid under the bed a lot and seemed very lost.  But she was still Banya.  When I would sit next to her, she would purr as loudly as a car engine starting up.  If I stopped, she would take one paw and wrap it around my hand and bring it back to her neck.  She never meowed, she chirped always making me smile. 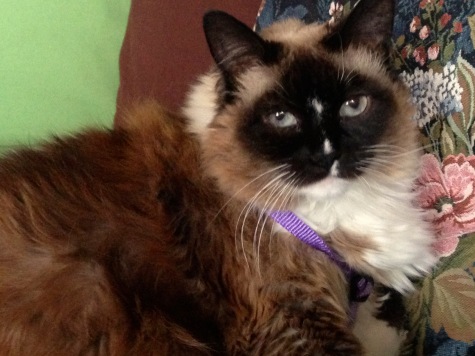 Then I did the unthinkable.  I bought a kitten from an SDF (Sans Domicile Fixe/Homeless Person) on Blvd St. Germain.  My only excuse was that this kitten was the spitting image of Samantha, my tortoiseshell, that died just before I came to Paris.  Banya hated her.  She didn’t just hate her, she made it clear that this was her territory and Bijou was not welcome.  She pee’d on the couch, she pee’d on the bed.  She pooped wherever she felt like except in the litter box.  I, who pride myself on knowing cats and dogs well, was beside myself.  I had no idea what was wrong.  She was thirteen years old and I thought maybe she was deathly ill. So off we went to the Vet who explained the facts of cats’ lives and territory to me.  So Banya wasn’t dying, she was just pissed as hell.

I set up the apartment so that each cat had her own space.  But, in fact, Bijou had the run of the place and Banya was relegated to the bathroom.  I made her a bed there, she had her litter box next to my toilet and she rarely moved.  If she had been human, she would have wiped her brow with the back of her hand and uttered to anyone who would listen “See what I have to put up with!” 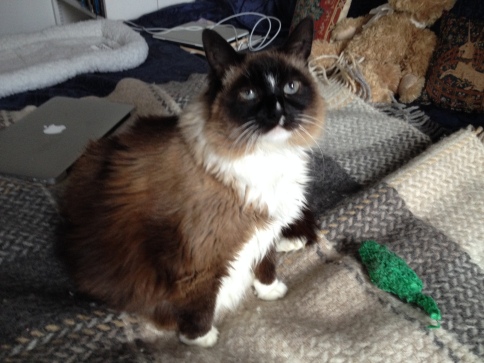 In January, I had to return to California.  I had to have hip replacement surgery and would be recovering there.  I’d be away from Paris for 4 months.  After a lengthy ping pong game in my head of “do this” “no, do that”, I settled on taking Banya back to the States and leaving Bijou in Paris with a friend.  So, once more, Banya was in California, back on her home turf. She was a different cat however.  She had gotten fat, really fat.  When she walked, she didn’t so much waddle as limp along to wherever she was going.  She didn’t seem upset by it.  I was the one upset.  Her spine wasn’t straight, it dipped.  It finally dawned on me the damage that had probably been done by the raccoon.  She seemed happy though, she went up and down the stairs, she slept in whichever room she pleased.

And I put off thinking about what I was going to do when it was time to return to Paris.  I couldn’t bring her back.  It seemed cruel.  I wasn’t sure where I was staying and for how long.  And eventually she’d have to be with Bijou.

Two weeks before I returned to Paris, I wrote a note to my neighborhood Listserve describing Banya who would be fifteen years old this August.  I explained the circumstances and asked if there was anyone willing to take in an older cat.  I included two photos.  Banya is beautiful.  She is a Birmin.  Birmins are the sacred cats of Tibet.  Her profile is magnificent.  When I look at her, I think of the Lion King.  It is such a proud profile.  I thought “how can anyone resist this beauty?” 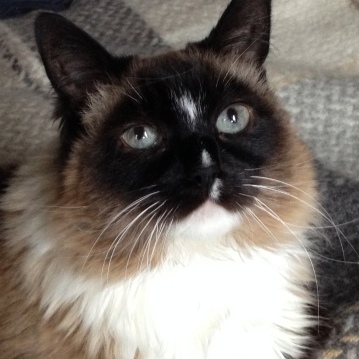 Within one hour, I got a response.  I called the woman back and I was so afraid she would change her mind, I rushed through an idea.  I was going to Yosemite for 4 days.  What if I brought Banya over and this wonderful person could see if Banya would fit into the household?  The woman thought that was a fine idea.

Banya is still there. I think she will live the life of Riley.  I took her on one trip to the Vet to make sure she was healthy and that there were no surprises.  She’d lost 2 pounds.  The day before I returned to Paris, I visited her one last time taking all the extra food I had.  She was seated on a window bench that looked out on the whole Bay Area.  She didn’t chirp in recognition nor start purring when I petted her.  I don’t know what felt worse.  That I was a bad mom and couldn’t care for my animals or that she didn’t seem happy to see me or even recognize me.

I can hear her chirp and picture her paw reaching out to keep my hand from leaving.