On Friday, Jan. 12, I flew to New Jersey to attend a Care Conference for my Uncle.  I flew a new airline.  Over the past couple of years, I read about this airline that has only business class seats at slightly more than economy price seats.  Since, I mostly fly Paris–San Francisco and back again, it wasn’t an option for me.  La Compagnie only flies Paris–Newark and back.

Because a friend raved about it last June, I decided this was a fine time to find out for myself. So I booked a round trip ticket that cost about 1500 euros total. Sometimes I feel held hostage by United.  I have many miles, enjoy using miles to upgrade to a very luxurious Business/First seat and love all the perks that come with having Premier status.  I wanted to free myself.  Maybe I won’t have Premier Class anymore.  Tant pis!

My friend was thrilled that I was going to give La Compagnie a try.  She warned me to get to CDG early as LC check-in was tucked away.  So the night before I left, I went on-line to see if I could find where LC check-in was. Terminal 1 but after that I had to wait.  Some blogs popped up in my search.  They turned out to be “horror” stories. They were written in 2014, I held my fears in check.  Whatever wasn’t working in 2014 certainly has been ironed out now.  From the time I left my apartment to the time I landed in Newark, everything went smoothly.

When I arrived at Terminal 1, the digital board told me that my flight was on time and that check-in was in Hall 3.  I walked slowly looking left and right and there it was right next to United.  Since there are only 84 seats, the line to check in went quickly.  One can have two bags at 70 pounds/32 kilograms each. I left with a fast access through security card and could wait in the iCare Lounge.  Unlike other airlines, the check-in doesn’t open until two and half hours ahead of take off.  This again is because there are only 84 seats.

The Lounge was one floor down from the United Lounge, plenty large and set up for a continental breakfast. 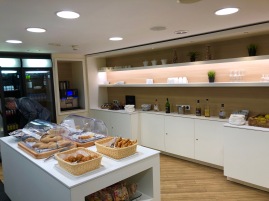 I still had to go through security so it was suggested to leave the lounge forty-five minutes to an hour ahead of departure.  Boarding the plane takes only fifteen minutes again because of so few seats.

The immediate impression upon boarding is of lots of space and very airy.  There are two seats on each side of the aisle.  Three attendants took care of us.  There are no frills and whistles.  No one asked to hang my coat.  I folded it up and put it in the overhead along with everything else.  Nothing is allowed on the floor during take-off.  As you can see, there is no barrier between the two seats as with other Airline’s Business Class seats.  I didn’t find that a problem.  If privacy is high on your priority list, this isn’t the airline for you. 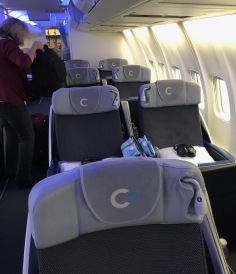 My “horror” story blog described the flight bags as made of tire like material with no toothbrush.  He was appalled.  The flight bag was perfect and there was a toothbrush.  The hand creme and lip conditioner were from the French company Caudalie.

The attendant only offered champagne before take-off.  But fairly soon after, a drinks trolly came rolling by.  Everything was on offer.  This was followed by lunch (take off was at 10:30am).  I always bring my own food but my neighbour let me take a photo of his tray.  This is before the hot entree was brought. 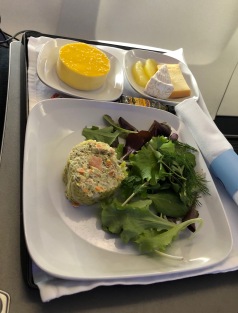 My only complaint is that the seat does not turn into a flat bed like most business class seats nowadays.  It would have been ok except the foot part didn’t rise and I found that hard.  Going to Newark was not a problem.  I wasn’t sleepy and watched two movies, read my book and did some writing.  My flight back to Paris left at 7:30pm and I was exhausted.  I slept on and off the whole way but the discomfort of my feet kept me from sleeping completely.  As the other blogger said, for the price I paid and having so much room, I thought everything was good.

Every seat has an iPad.  They are turned on about fifteen minutes into the flight.  One has a choice of about 20 movies, 3 audio books and 4 special videos.  The map with the flight progress is on four screens overhead.

Everything went smoothly.  Even the bumpy parts of the flight were fine.  We landed early and taxied to the gate right on time, to the minute.

My return flight was very similar except that I have very little idea what happened after I closed my eyes.  Did they serve a dinner?  Don’t know.  Don’t even remember a drinks trolly.  The check-in was just as smooth except it was in English and there were four people doing the check as opposed to two in Paris.  The Lounge was before security and very elegant.  It had the feel of old world glamour.  The food was better than anything I’ve ever seen.  An entire dinner was laid out so I suspect that dinner was not served on board. 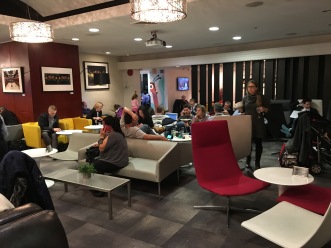 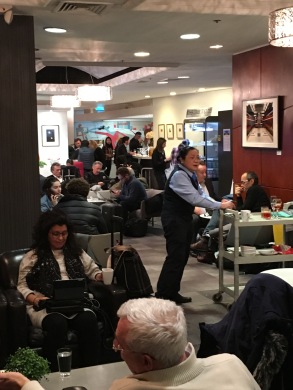 When you go on-line to book a flight, after picking your dates, four different prices come up.  Each price has conditions.  The cheapest is called promotion which is what I got.  Since turning 65, I always get flight insurance now.  As they say in many countries, Shit happens.

If my opinion counts for anything, I recommend this airline for the price, the space and the ease of travel.  You do need to be going to Newark or Paris or be willing to land there before the next lap of your flight.  Happy Flying!!!