I am in the south-west of France.  Once upon a time, this area was known as Gascony–famous for it’s wonderful food and fois gras.  Then the area was divided into two parts: Le Gers, more inland, and Landes, the beaches, as far south as Bayonne, and the forests that border Gers.  The people here are still known as Gascons, the restaurants are still famous for Gascon cooking and Le Canard Gascon is still pictured on many publications looking cute and silly.  Which I’m quite positive he is not feeling as he is foie gras in the making.

After living in Paris 4.5 years, I have some confidence that my home in California will stay rented and that I can pay my rent in Paris.  So for the first time, I have done two home exchanges.  The first one was last winter in London and this is my second.  I am staying in the lovely home of two Americans who live here permanently and they are staying in Oakland.  I am now a true Parisienne who has left Paris for the summer! 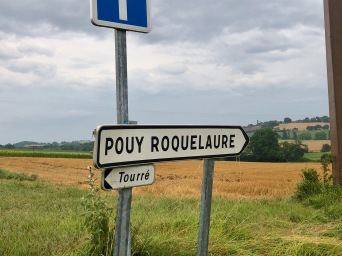 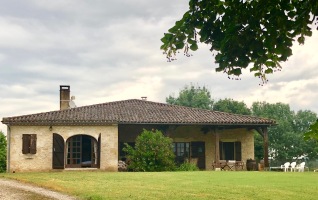 Pouy-Roquelaure can be found on the map halfway between Agen and Condom.  It is a very small village with a church and a Mairie (Mayor’s office) but no retail of any kind.  It doesn’t even have a morning march.  I am staying just outside of Pouy with a view of sunflowers everywhere and far into the distance the patchwork quilt of green, brown and yellow.  It is extraordinarily beautiful.  In the morning, if I eat my breakfast outside I can hear the songs of birds and am just a bit sorry that I don’t recognise their breed.  As the day gets hotter, the birds are quiet, everything is quiet and only on a windy day can one hear that familiar country refrain of leaves rustling. 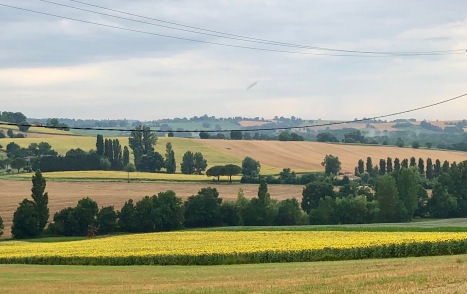 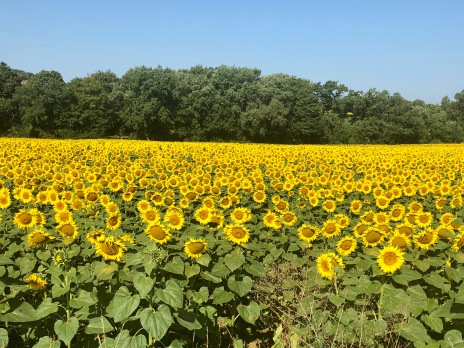 The first morning I was here, I walked out the front door, went down to the mailbox and turned left.  From there, I followed trails/paths that took me alongside sunflower fields, a small stream then into the village of Pouy and back to Tourée–a full circle of about 8 kilometres. 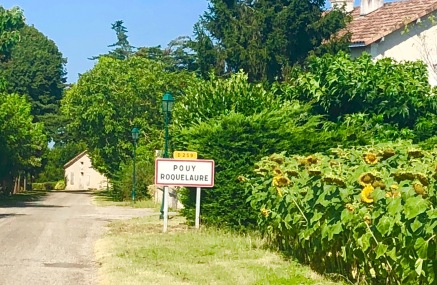 I am also charged with caring for a ‘swimming’ pool.  I have never had my own swimming pool.  Lovely as it is to jump in when I’m hot, I don’t think I’d want one.  For one thing, it’s a lot of work.  But more important to someone who loves to swim as much as I do, it is agonizing.  I do about five strokes of the crawl and hit the end.  I almost had a smash up involving a number of fingers on my hand the first time I had the great idea of swimming laps!  So I’m not thinking of it as a “swimming” pool but only a pool.  It is unheated and the loveliest time of day to get in is late afternoon, early and late evening when the sun has heated the water up.  I must admit that getting into my bathing suit at 10pm and swimming a couple of laps is a truly delicious experience. 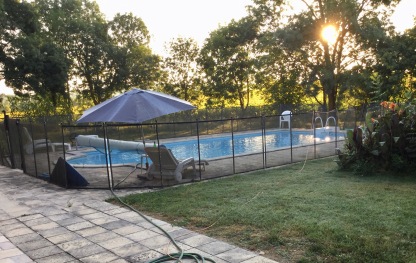 The French love to walk for which I’m very grateful.  They produce an endless amount of books on walks in every region of France.  My hosts equipped me with two books of Les Randonnées (as walking in France is called).  One covers the Gers region below the city of Agen and one covers the Lot-et-Garonne region above Agen.  To my delighted surprise, a large part of the GR65 known as the Chemin de St. Jacques goes through Pouy to Condom to the walled city of Larressingle on it’s way down into Spain.  Walking the Compostale is on my bucket list and I can now say I’ve walked at least 45 minutes on it!!!  The symbol of GR means Grands Randonnées which are the larger trails that go through a number of regions and PR is Petites Randonnées which are the smaller trails that stay within a region. 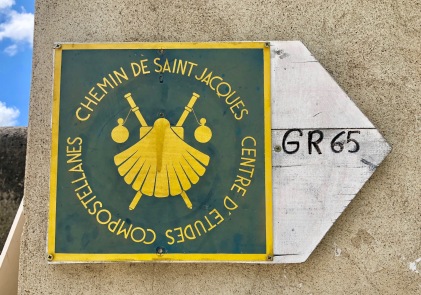 Next: the village of Condom and some surrounding towns.