Is there anyone alive who doesn’t know that Princess Diana died in a horrendous auto accident entering a tunnel near the Pont de l’Alma?  It happened 21 years ago this past August.  Emerging from the Alma-Marceau metro and walking towards the bridge (Pont de l’Alma), you have to pass a large flame that to this day is always covered with flowers and photos of  Princess Di. 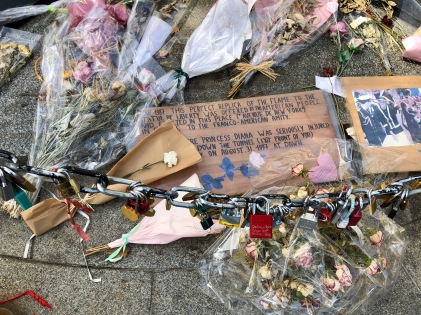 Several times a week, I cross Pont de l’Alma coming from the American Library headed to the metro and home.  I’m often with someone else and I always ask, pointing at the site, “Do you know what that is?”  Usually I get back “A memorial to Princess Diana?” or “I’m not sure, what?”  Having come to Paris many times over the last 50 years, I knew that that monument had been there before Princess Di died.  But I didn’t know what it was.  So I asked someone. 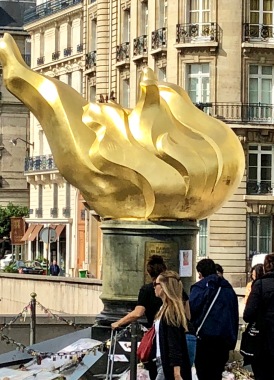 It is the flame that our Lady of Liberty, given to the US by the French, holds for all peoples, immigrants and others, to see as they enter the Port of New York.  “Erected in 1986, the 12 foot metal fire is a made of copper covered in actual gold leaf. Donated to the city by the International Herald Tribune, the flame officially commemorates not only the paper’s hundredth year of business as well as acting as a token of thanks to France itself for some restorative metalwork which the country had provided to the actual Statue of Liberty. Even with the air of global familiarity emanating from the sculpture like heat from a flame, the site has taken on a grimmer association in recent years.”   AtlasObscura.com 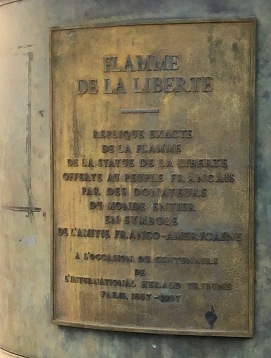 Princess Dianna had her tragic accident just under the monument and not knowing where to express grief, people began putting flowers, photos and expressions of love at the base of the flame.  The younger generations have no idea why it was originally constructed. 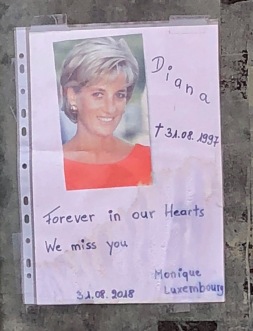 Almost every day and, certainly on the anniversary of her death, something new is added.  I’ve passed the flame when flowers were six inches deep.  There is always a crowd around the Flame, always there for Diana and not Lady Liberty.  Today, many people think the Flame was built for Diana. 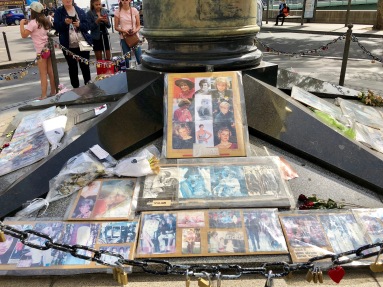 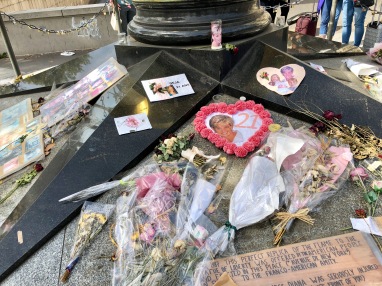 Thirty-two years after the Flame was built, relations between France and the US are not very good.  President Trump has refused to meet with President Macron when he arrives in France Sunday to commemorate the 100th Anniversary of the end of WWI.  Vigils are being planned for Saturday night and all day Sunday protesting Trump’s behaviour and the lack of liberty in the US at the moment.

The Flame now seems to represent tragedy.  On a smaller scale–that a Princess died underneath on the roads of Paris and on a much grander scale–Liberty being exchanged for Autocratic rule and Dictatorship.  Trite as it sounds, one can only hope that the flame of liberty never goes out and there is always hope.