People traveling to Paris always seem to have high on their list of “Must See” first the Eiffel Tower then The Louvre followed by the Musee d”Orsay.  If you were to ask them who their favourite French painter is, more than likely 60% or more of them would respond “Monet”.  So I have made it a project of mine to introduce Americans to the Musée Marmottan-Monet.

It just happens to be about three blocks from where I live but that is only one of the reasons I love it.  In no particular order, I love it because 1–it is small and easily negotiable without getting overwhelmed or tired.  2– it has the largest collection of Monet paintings in the world 3–it has the largest collection of Berte Morrissot paintings and drawings and 4–it is a wonderful example of what an old hunting lodge turned town house looked like back in the days when this part of Paris was actually outside of Paris and men came in the Autumn to hunt.

The website of the Musée Marmottan has this to say about the history of the building and the permanent Collection.  “Former hunting lodge of Christophe Edmond Kellerman, Duke of Valmy, the Marmottan Monet Museum was bought in 1882 by Jules Marmottan. His son Paul settled in it, and had another hunting lodge built to house his private collection of art pieces and First Empire paintings.

Upon his death he bequeathed all his collections, his town house – which will become the Marmottan Monet Museum in 1934 – and the Boulogne Library’s historical rich historical archives to the French Academy of Fine Arts.

In 1957, the Marmottan Monet Museum received the private collection of Madame Victorine Donop de Monchy as a donation inherited from her father, Doctor Georges de Bellio, one of the first lovers’ of impressionism whose patients included Manet, Monet, Pissaro, Sisley, and Renoir.

In 1966, Michel Monet, the painter’s second son, bequeathed his property in Giverny to the French Academy of Fine Arts and his collection of paintings, inherited from his father, to the Marmottan Monet Museum. This donation endowed the Museum with the largest Claude Monet collection in the world. On this occasion, the academician architect and museum curator, Jacques Carlu, built a room inspired from the Grandes Décorations in the Tuilerie’s Orangerie to house the collection.

The Denis and Annie Rouart Foundation was created in 1996 within the Marmottan Monet Museum, in compliance with the benefactress’ wishes. The Museum was hence enriched with prestigious works by Berthe Morisot, Edouard Manet, Edgar Degas, and Henri Rouart. 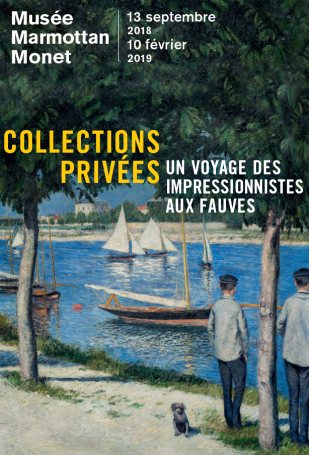 As well as the extraordinary room downstairs that houses many of the Monet’s, the Museum has twice yearly exhibitions.  The one that is there from September 13, 2018–February 10, 2019 is called Private Collections: From Impressionism to the Fauves.  The entire exhibition is paintings taken from private collections, many have never been seen before.

It seems only right that the exhibition opens with paintings by Monet.

Caillebotte, who I never studied in University as an Art History major, has become an artist that I highly respect and I have grown to love his work.  The poster announcing the exhibition is by Caillebotte.

These two Gauguin paintings are examples of his work from the time he lived in Pont-Aven, Brittany.  I had to include The School of Pont-Aven as I visited friends there last summer.  That is when I first learned of the school and the Gauguin stayed there between Paris and French Polynesia. 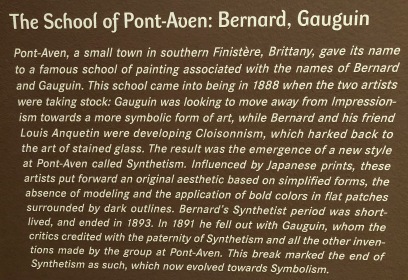 I have taken up way too much of your time so I will introduce you to Berte Morisot and her paintings at another time.  If you are coming to Paris, please make sure to visit the museum.  You take the metro 9 to La Muette.  From there you walk through the wonderful Parc de Ranelagh.  The park ends at the museum.  If you love art, you will not be sorry.

And to wet your appetite in case you are not visiting until next Spring, the next exhibition is posted here!! 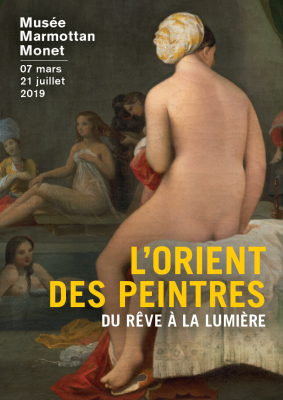 And Paris??  It is cold, cold, cold.  The days have been in the high 40s and low 50s.  The nights have fallen to the high 30s.  Out have come the wooly caps and scarves, down jackets and doubling up on socks in one’s boots.  Restaurants have brought out their large heaters so that Parisians can still sit outside if they choose.  Seats have blankets on them to serve as lap warmers!!!  How wonderful is Paris?!

So wherever you are, stay warm.

Everyone in Paris is praying and wishing the United States Bon Chance and Bon Courage on November 6.

If you look on your map of Paris, you will see that the 16th arrondissement is huge.  Many map books divide up the 20 Paris arrondissements into quartiers (neighborhoods).  Very sensible for the 16th.  On the East is the Seine, on the north is Avenue Marceau going up to Etoile and Ave de la Grande Armee going all the way to Porte Maillot.  And along the entire length of the west of the 16th is the Bois de Boulogne. To the south is Porte Saint Cloud and Boulogne Billancourt.

I’m just a smidge further than half way down and two blocks from the Bois.  Sunday morning, I put on my sneakers and went exploring to see what I could see.  Within five minutes, I had crossed over the Porte de Passy and was in the Bois.  Another five minutes and I was at the Hippodrome d’Auteuil which is large.  On one end is a golf course.  On the other is a swimming pool.  I’ve been thinking that I should start swimming again, that my hip would thank me.  It was a Sunday and I saw no one to ask so I left that investigation for another day.

I came to Lac Superieur.  I started to walk around it.  Runners were everywhere, many doing the Lake circuit a number of times.  And as often happens, everyone seemed to be going the same direction.  This time it was clockwise.  I was walking counter-clockwise.  Arriving at my starting point, I began walking down L’Hippodrome.  Signs kept telling me that Les Grands Cascades were in that direction.  I don’t see them on my map.

Walking, I was mostly alone on this wide tree-lined street.  The trees had grown into an arbor over the road.  It felt like Fall.  A lot of leaves had fallen so there was green, yellow and that tannish brown that leaves get when they aren’t in Vermont but haven’t drowned in rain. In spite of the runners, it was very quiet.  Surrounded by trees and beauty produced a calm.  There was hardly any wind so the stillness seemed complete.  One could walk and think, solve a few problems, pay attention to what is around me and feel at total peace for a few minutes.

I passed dirt paths telling me that  if I walked north I’d arrive at Porte Maillot where I lived all May and most of June.  Porte de la Muette was northeast.  I now shop there. Porte de Passy is the next one after La Muette.  Two of my buses stop there and are often easier than taking the metro.  You have to picture Paris before cars. Those who could rode horses.  If you left Paris, you came back in through one of the gates.  These are the Portes that circle the city today.  They are often entrances onto the Peripherique which is the major through-way circling the city.  You have to get on it to go anywhere unless, like in days of old, your road takes you up to the Porte and you keep going because you are already in the right direction.

I walked for over an hour and was barely inside the Bois.  Just before I entered, I saw  a long stand of city bikes, known as Velib’.  Next week, I will rent one and see how much of the Bois I can cover.

I am not ready for summer to end.  It all goes too quickly.  So though it looked and smelt a lot like Fall during this walk, I’m crossing my fingers that we still have hot days ahead of us.

I received a lovely e-mail from a reader this week telling me how much she is learning about Paris and France from reading my blog.  She urged me to do more posts.  Thank You lovely reader.

After waiting almost two months, I have finally moved into my new apartment in the 16th arrondissement.  The view from my window is extremely soothing but not very interesting to a Paris tourist.  I overlook a Courtyard and garden.  The amazing thing about this apartment is that it has a terrace.  Everyone in Paris would like a terrace, it is a premium commodity.  I don’t have just any terrace.  I have the equivalent of another room! With a table and chairs for eating, a chaise longue for reading and room to start a small Parisian terrace garden if I so choose.

When one walks around the 16th and looks up, it’s impossible to miss all the terrace gardens with so much lush color and different shades of green.  If you are standing up high in an apartment building, you can see that almost every roof top has a terrace that is home to a garden–with trees, bushes, sometimes benches.  I don’t know if this is unique to Paris but it’s a wonderful aspect.

My street is very quiet.  Even the church bells across the street are quiet unlike the bells of the Catherale de Notre Dame which announce themselves throughout at least 4 arrondissements.  My street dead ends into Boulevard Beausejour.  After passing through a path for pedestrians only, I am two blocks from the Bois de Boulogne.  The Bois de Boulogne is the smaller of the two parks that sandwich Paris from the West and the East.  There are lakes and bicycle paths, boathouses, the Jardin d’acclimatization which has a wonderful playground for children.  I once saw a small camel there giving rides!  The extraordinary Fondation Louis Vuitton is next door.

The other end of the block crosses Ave. Mozart, a wide street with small, very Parisian little stores: a bakery, vegetable and fruit market, fish market, etc.  The metro 9 is one block from my street.  The closest grocery store is Monoprix which is quite a walk down  Ave Mozart.  I was very spoiled in the 6th where I lived.  Everything I needed and more was at most 6 blocks away.

The 16th arrondissement is laid out differently than many of the others.  It goes from north to south and is long, bending with the Seine as it turns south from more central Paris.  The streets are wider, everything is greener.  Along the Seine are some important organizations such as Radio France.  I’ve only gotten to know a small part of this area from Michelange-Auteuil up to La Muette and Rue Passy which has the beautiful clothing stores.

Please stay with me as I explore my quartier (neighborhood) of Paris that most tourists don’t come to.