While in California, I sent my downstairs neighbor a photo of the Golden Gate Bridge.  I sent it the day after the election.  Being somewhat numb, I couldn’t think what to say so I wrote “Greetings from Oakland” or something banal like that.  When she received it, she texted me “Merci Sara pour la très belle carte du pont de SF qui sera toujours là après les élections….(thank you Sara for the lovely card of SF’s bridge which will still be there after the elections…”)

I had similar thoughts the morning after I returned.  Sitting at my table, looking out my window on to the Seine and the Pont Neuf, I thought “this scene doesn’t change.  It has survived bad kings, the french revolution, the terror, the commune, World Wars I and II, surely the left can survive four years of the right led by someone who is going to have to take a speed course on the doings of US government.” 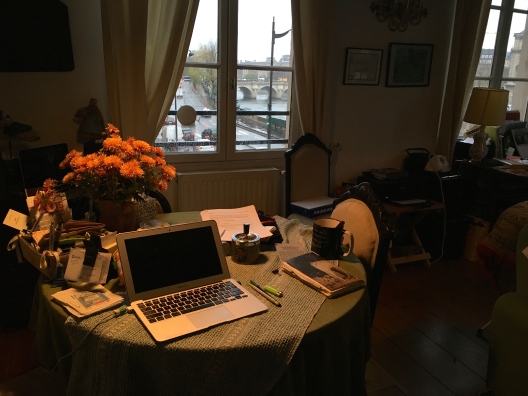 And so my numbness slowly went away.  My jet lag has been relatively mild, just sleeping a lot.  I haven’t turned on the news.  I was hearing horror stories of teens doing very questionable things to non-white teens in their schools.  That was enough.  I’ll get back into my daily life here and sooner or later, things will be very clear on how the wind is blowing in the United States.

I’m told one of the first politicians to call and congratulate Mr. Trump was Marine La Pen, she who would very much like to be the next President of France.  We’ve called her the French Trump because of her stand on immigration.  After Brexit, she was ecstatic and called for a referendum in France.  She wants France to leave the EU.  I don’t think she’ll be called the french Trump anymore, too superstitious.  The French elections are in five months and eyes will be turned this way to see if bad things come in threes.  Ms. La Pen has been building power as immigration becomes the most important issue for almost everyone.  The choices, so far, are not great.

It’s a strange time.  I was born in the aftermath of World War II, grew up in the Kennedy years, became a hippie in my university years and now have watched politics swing as far away from those years as it could possibly get–at least in a democracy.  I’ve been extremely active in politics and I’ve been asleep.  Right now, it seems to me that what is called for is living the best possible life I can lead.  To do random acts of Kindness — because I can.

There is an opinion piece in the New York Times this morning written by Nicolas Kristof titled: A 12 step program for responding to President-Elect Trump.  I thought it inventive and smart.  I pass it on to you: