Out my window, it’s dark.  The Quai is mostly clear.  The Seine is quiet, all the young people who sit on the concrete sidings until 1 or 2 in the morning have gone home.  The spotlights on Notre Dame have been turned off.  It’s that time of night when the only people awake are those that are tossing and turning because they can’t sleep. 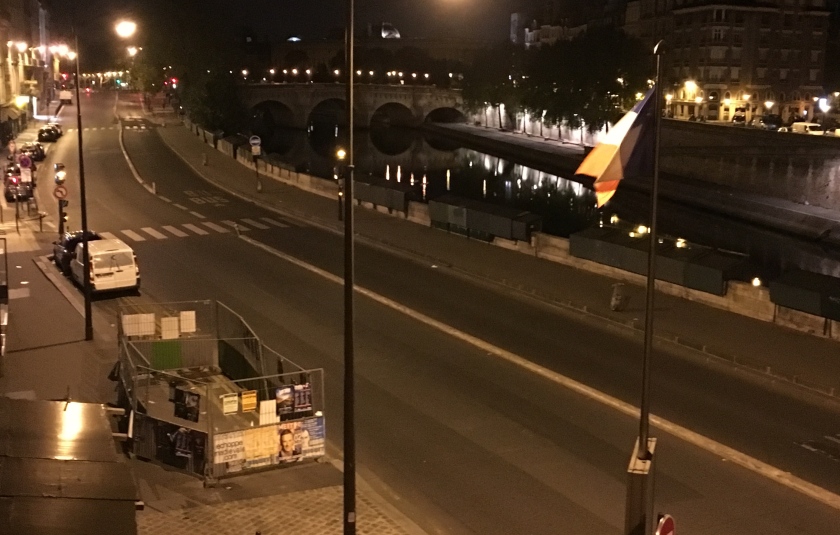 I’m not looking out the window.  I was deep into sleep and had set my alarm to wake up before 3am.  Hillary Clinton is ‘debating’ Donald Trump. She actually looks lovely in a red suit and he looks exactly the same.  His hair is combed forward and looks at bit like a small mop. Both are standing in front of a huge blown up photo of the Constitution.  When she talks, he stares at her with a huge frown on his face. 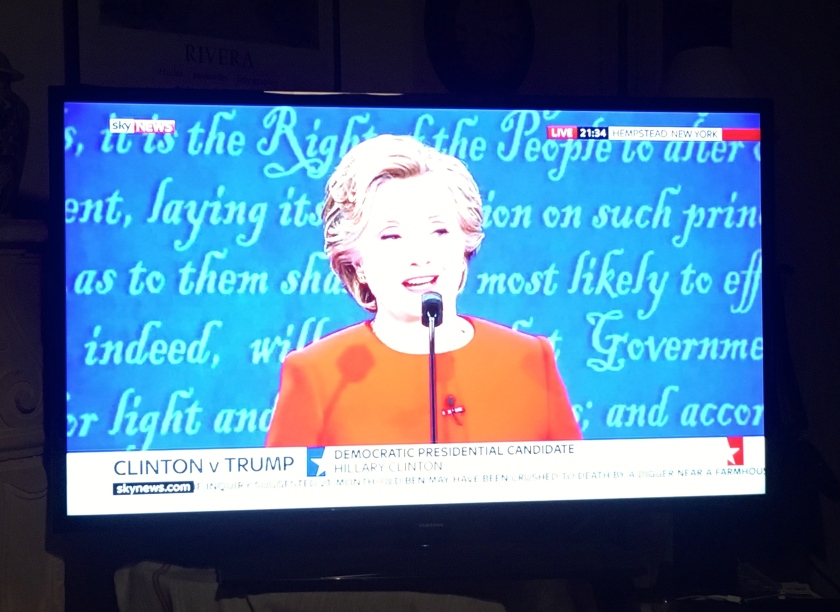 Here in Paris, the news doesn’t show either of these two at campaign rallies 24/7.  In fact, I can’t remember the last time I saw the Donald on France24, Al Jazeera or BBC news. I’m very familiar with Hillary’s voice but I’m surprised that I recognize Trump’s voice.  He seems to be doing exactly what he has done for a year and a half–criticizing “Secretary Clinton”, criticizing government, criticizing everyone that isn’t him.  As I’m writing he is bragging about how he forced President Obama to produce his birth certificate.  I’m stunned.  What is it with him?  He can’t produce his income taxes but because President Obama is black, he engaged in this birther theory year after year after year. 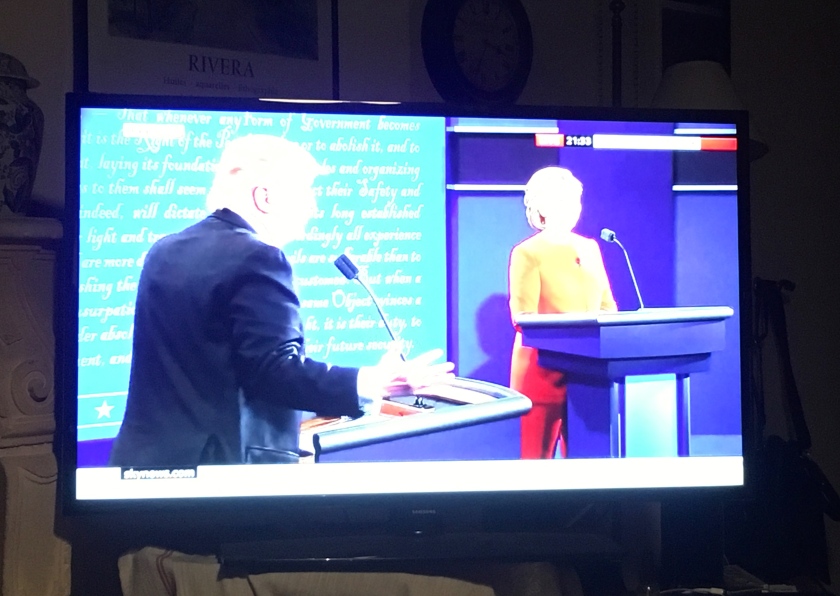 I, and many of my friends that don’t live in the United States, are frightened.  The slight possibility that Donald Trump could be President of the United States is so appalling that it is barely imaginable.  Whatever one thinks of Hillary, I happen to be a fan, she is prepared to be president.  She is probably more prepared than any other candidate in history.  She’s been in the White House, she’s been Secretary of State and Senator from New York.  She was shown to work well with Republicans in New York. If she were a man, there wouldn’t even be a competition.

I’m surprised I actually woke up and got out of bed for this.  I could have read a transcript in the paper in the morning.  I could have read the critics’ observations and declarations of who the winner is.  I needed to see for myself the narcissism, the outright lying, the incredible immaturity of the man who wants to be Commander-in-Chief.  I give her huge points that she is standing there and still has a smile on her face.  She must be seething inside. No matter the question, he has to have the last word.  Lester Holt, the moderator, is not doing a good job of managing his outsized ego.  One of the critics is saying that this is a debate for the fact checkers.

The debate is winding down. It’s time to go back to bed.  I don’t know if I can sleep.  This is as serious an issue as any I’ve known in my lifetime.  I will finish by quoting Hillary: “I hope you get out there and vote as if your future depends on it.  Because it does.”