The title of my blog is so apropro right now. Everyone in Paris in watching life out their windows. On Wednesday night at 8pm, everyone who has a terrace went outside and clapped. Those who didn’t, leaned out the window and clapped. We were clapping for all the doctors and healthcare workers, the pharmacists who are showing up for work every day. They have extraordinary courage. It was very moving standing on my terrace listening and clapping. Below me, some of my neighbours were making whooping up loud calls. I was sent a video of a woman singing opera on her terrace. When she finished, the cheers were breathtaking.

What is the mood here? It depends who you ask, I guess. My mood is grateful and mostly content. I am well prepared to be inside for 6 weeks. We are allowed outside with our little “passports” to go to the pharmacy and the markets. What is the “passport”? Everyone was sent a form to be printed out. If we want to leave our dwellings, we fill our the form with our name and address and the reason we are outside. There are 5 approved reasons. 1–to go to the market; 2–to go to the pharmacy; 3–if you have a medical appointment; 4–exercise with the understanding that we will stay 10 feet away from other people (however cycling is completely banned); 5–to aid an elderly person or disabled person. We are on the honor system as to what we give as our reason. We need a new paper for each time we leave our homes. If the police stop us and we don’t have our paper, we will be fined at least 130 euros. On Tuesday, the first day, the police gave out 4000 fines.

The markets are stocked. My little corner store had toilet paper on Wednesday. The pharmacy had gloves today. I’m skilled on Zoom platform and have taught my Book Group how to use it. We will stay connected and still have our monthly get-togethers. About the only thing I can’t control is what is going to happen next. I am very aware I can’t control it so I’m not worrying. It seems to me to be a waste of energy. When I went to the pharmacy, everyone older than 40 was wearing a mask. While everyone younger (this is a gross exageration of course) were walking side by side. I saw three youths smashed into the front seats of a very small car. But on the whole, my arrondissement now looks like Paris in August.

However I’m told that the traditional french Apéro is not forsaken. People especially students are sending out invites on Zoom and Skype to join each other for an Apéro (the before dinner drink with snacks) that is a custom especially on Fridays.

As of today, there are 10,000 reported cases in France. The papers say that the numbers double every day. There is not yet widespread testing so the country’d health minister thinks the number is closer to 20,000. The death toll stands at more than 300 and rising every day. In the east of the country, which is the worst affected, a military hospital has been set up after local medical services were overwhelmed with the sheer number of cases. (The Local)

With these numbers, it’s important to remember that 97% of cases recover and 50% of that number doesn’t get terribly sick. So far, I know of no one among my friends who has it or has had it.

The sun is setting on another day of lockdown. I think of my parents who lived through the depression and then WWII. That’s 25 years of not knowing what the future would hold. This is the first time in my lifetime that I’ve experienced a world crisis like this. But it’s not the first time it has happened. My parents lived through it and so will we. Almost time to go to my terrace and clap.

Someone asked me how I stay connected to the United States. Specifically she wanted to know what kind of International phone plan I have.

I don’t.  So if you are traveling to Europe or anywhere and planning to stay a month or longer, you might be interested in what I do.  I have two mobile phones.  I have my American cell phone that I use when I’m in California which is about two months out of the year.  The day before I leave to return to Paris, I call AT&T and ask them to put my phone on ‘Suspend’.  That costs about $11.50 a month with tax.  I still put that phone on airplane mode just in case.  I have no reason to take it out of my apartment.

I have a french mobile with a french number.  I pay much less a month than I do here in the States!  Since I’m only gone a month at a time and the fee is so much cheaper, I don’t bother with a suspension.  But I do make sure I have it on Airplane mode from the minute the plane lifts off the ground at CDG.

I have had my Oakland home phone number with Vonage, a VOiP, for 10/12 years.  The year I moved to Paris, 2013, Vonage designed an App to download.  I can go into the App and call the United States and my home phone number shows up on the recipients phone.  People in the States can call me without any extra charge as they are calling a California number.  I do keep that phone, the American one, on Mute, as people often forget how many hours I am ahead of them.  I just call them back.

For all the above, when I’m in Paris, I pay a total of $75.  That is about the price of one month of AT&T cellphone service.  Why on earth would I get an International plan?

I now have friends all over Europe.  We call each other on Skype, which is audio as well as visual, or download WhatsApp or Viber (WhatsApp seems to be more popular at the moment).  All the Apps can be used on my french phone at any time wherever I am.  I have found, however, that reception is best if I’m at a Wifi spot.

Then there is the wonder of FaceTime.  I have an iPhone (I actually have two iPhones but you get the gist).  There is no charge to talk to another iPhone anywhere in the world using FaceTime.  Again, the platform is strongest at a Wifi spot.

Until this morning, my Facebook page had never been hacked.  I discovered it within a couple of hours and got it taken care of quickly.  So I am one who is constantly grateful for technology.  I’m not particularly savvy but what I do know and what I do have keeps me connected to all my friends around the world.  I don’t find it difficult at all to keep everything straight.

For people who do come for a shorter time, one or two weeks in Paris for instance:  if you want a french number, Orange will happily sell you a SIM card with 2 weeks worth of talk time and unlimited texting for a reasonable fee.  Most french numbers can call a landline in the US and UK.  But as more and more people get rid of their land lines, that becomes a moot point!

I hope this is helpful.  People are so glued to their phones these days that the idea of not being connected while they are traveling is terrifying.  These are one person’s suggestions.

Ok, Macron first.  I’m not going to write about him and how he won the French presidential election.  Everyone else has written about it.  What I can say is that among my friends, mostly American, everyone was holding their collective breath.  The media was saying he would win by a landslide 60% to Le Pen’s 40%.  But we had all heard that before with Brexit and with Trump.  No one wanted to be the one to say it out loud and then be wrong. 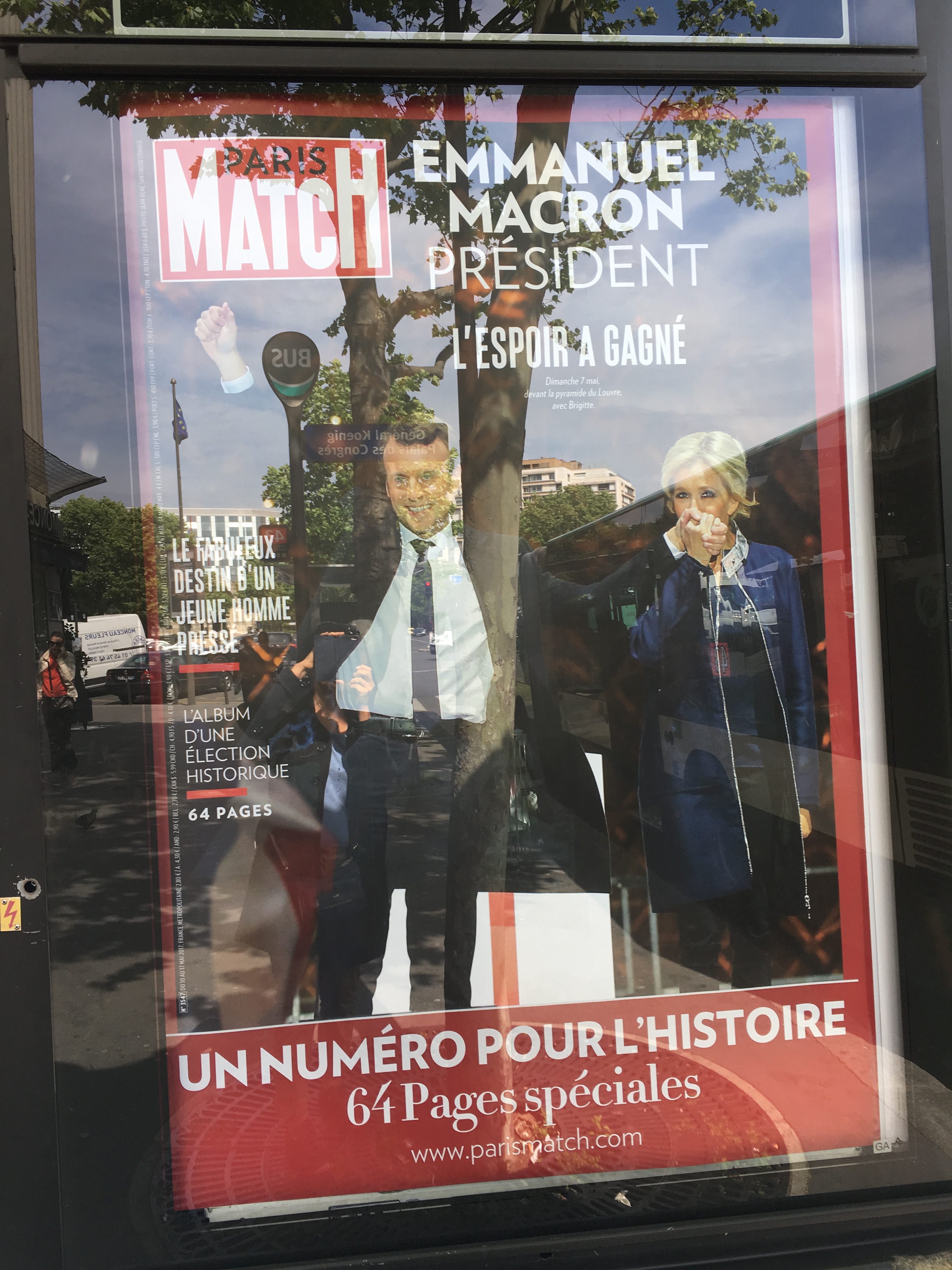 So it was with a huge sign of relief that the French went to bed last Sunday night knowing that their new President would be Emmanuel Macron or, as Le Match is calling him on their front cover, The Kid.  I went to sleep hearing horns honking and voices cheering.   I am in the 17th arrondissement and the victory party was in the 1st at the Louvre.  So there were many happy people that night.

The majority of people were happy that Marine Le Pen lost.  No one really knows what a Macron presidency will look like.  Many in France didn’t vote or voted by leaving their ballot blank.  Banker and racist to these people are equal in their sinister meaning.  Macron’s party, Onward (On marche) is one year old.  He now must have members standing for election in the next months and they must win.  He needs the strength of his own party in order to achieve anything.  He is the elite and no one is sure what that means.  But I remind people that FDR and JFK were also the elite and we Americans look back on those two as two of the greatest Presidents in US modern history.  So Onward!

I have been back in Paris for 11 days.  I had probably the worst jet lag I’ve ever had.  Friends were saying I made no sense when I talked and for the first three or four days, I had the affect of being on drugs.  It occurred to me after five days that I was still less than three months from a serious hip operation.  I had been doing so well, walking a number of miles a week, throwing away my cane! and acting as if I was totally recovered.  But I’m not.  The doctor says there is 90-95% recovery in the first three months then it takes an entire year to have 100% recovery.

Standard jet lag lore is that it requires one day of recovery for every time zone one goes through.  I went forward nine time zones coming from Oakland, California to Paris.  I think my body may have gone into a bit of shock with the altitude, the jet lag and the recent surgery.  Sure enough, nine days after landing, I started feeling human again.  I wanted to explore this new neighborhood I’ve landed in while looking for a permanent place to live.  The weather has gotten a bit warmer and is much more inviting.

Something I keep getting reminded of and feel extremely grateful for is the importance of technology for someone like me.  I haven’t had a working french phone until today and the Wifi in my little studio was, at first, nonexistent and then very sketchy while I tried to figure out what was wrong.  On Thursday, I spent 1 hour at the SFR boutique with my not very good french (it’s amazing how much one can forget in four months) and my computer until the young man worked everything out.

I think it’s possible for someone like me to travel because WiFi, the internet, Skype keeps me connected to the world at large.  It’s very hard to feel lonely.  Cut all that off and it’s me in this small studio apartment unable to reach out to communicate.  It’s a blessing I love to read so much – because that is what I did – read 4 books in less than two weeks.

I don’t like reading about the kind of hacking the world experienced yesterday.  I feel grateful for my computer and WIFI every single day and want nothing to ever go wrong. Cyberspace is the Wild, Wild West.