While still In Paris wondering what Le Gers would be like, H sent me a couple of e-mails describing music festivals taking place while I was there.  He let me know how far away they were from Pouy and whether he had enjoyed them in the past.  So I thought “OK, if there’s nothing better to do, I’d love to go hear music.”

Upon my arrival and with very little investigation, I learned that there were at least three or four festivals a weekend, most including music: Organ concerts almost every night of the week that rotated around village churches and cathedrals; spectacles; theatre; night markets with bands to both listen to and dance to.  Saying there are a few music festivals during the summer in Le Gers is a bit like saying there are a few raindrops when it rains. 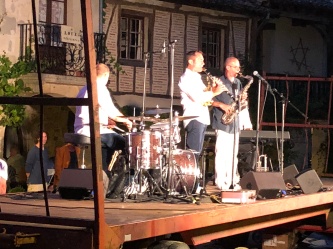 The most famous of the Festivals is a ten day Jazz Festival in Marciac (southwest of Auch).  Special guests this year were Joan Baez (sold out immediately) and Santana.  It would have been a very long day to go to Marciac and come back on small roads that I didn’t know well late at night (remember how the Gascons drive!).  After Barbara arrived, we went to visit Fourcès (my second time) and we saw a sign advertising Marciac in Fourcès, August 10.  Easy to get to as it was 20 minutes from Pouy. Off we went, driving my favourite back route through Mèzin passing fields of exhausted sunflowers, heads bowed down awaiting their fate. 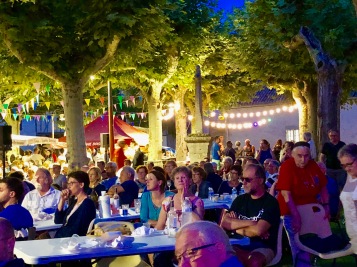 We arrived around 9pm and the music had started.  The town square which is a circle, making it one of Les plus beaux villages de France, was filled with chairs, every one of which had a person sitting n it.  Many people had brought their own chairs or stools and at least 200 hundred people were eating at tables they had brought, full of wonderful food,circling the centre.  We ran into a woman we’d met earlier in the week.  Something like that always helps me feel like I belong.  After a walk around the shops which were open for the evening, we made our way to the front to listen.  A friendly Gascon gave Barbara his seat on a long bench.  The woman seated next to her turned out to be the drummer’s mother.  The group was called The Louisiana Hot Trio and they had brought along a famous horn player, JF Bonnel.  He had three other wind instruments at his feet in front of him.

The music was toe-tapping good, it was difficult to keep still.  I saw couples doing a jitterbug under the arches that encircle the “square”.  The sky was clear and full of stars.  Everyone was smiling, many bouncing their heads in tune with the music.  One fellow seemed a bit tipsy and made his way to the top of one of the two haystacks on either side of the stage.  After making sure that everyone saw him, he lay down on his back, arms behind his head, feet in the air and settled in to listen to the music under the stars. 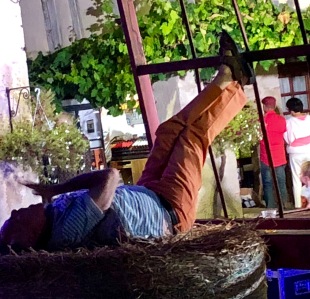 Before we left home at 8:30pm, we thought we were tired.  We said we would only stay an hour. HA! We stayed to the bitter end–not late for the French, maybe 11pm.  Some, like us, wandered off to their cars.  Many migrated to the restaurants. 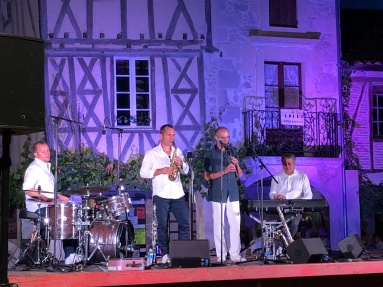 I hear Marciac can be expensive.  Marciac in Fourcs was free.  I wondered if it was due to the fact that the drummer was a local.  H. later told me that the real local was someone connected to the Jazz Festival and had the clout to bring one group to his village.  It was a night to remember.  Not just for the music but for the welcoming attitude of the Gascons, the ability to join in to a local fête and the sense of being right where we were supposed to be. 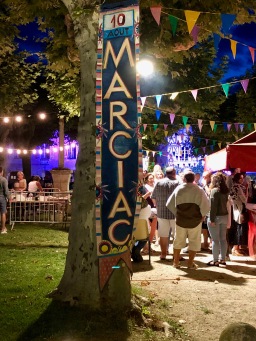