They call themselves brocanteuses.  There is no real translation for the word, the closest being seller of bric a brac.  But they aren’t and they don’t.

I’m talking about Mary and Jo who work the Foire de Chatou which I just got home from.  It is a huge ‘fair’ of hundreds of dealers in everything imaginable. This particular Fair takes place every March and September for ten days.

In Paris, there is no such thing as a garage sale or a boot sale.  In fact, it is illegal to sell anything in front of your building.  The closest equivalent would be ten or so families getting together and renting a square from the city and having a Vide-grenier – a flea market.

The Fair I just returned from is a Brocante with antiquity dealers there. Jo explained that they have to sign a certificate verifying that they do sell antiques.  She and Mary call them selves Brocanteuse antiquaire meaning most of their stuff is less than 50 years old but they may have older things.

Mary is British, lives in Antibes, speaks fluent French and makes her living selling beautiful dishes, cutlery and silver plate that she buys in England and her many buying trips.  She brings them back to France.  Over the thirty-four years that she has been doing this, she has learned what the French like.  Today, however, I watched as a group of about six American women from Atlanta, huge smiles on their faces, swooped into her space and bought almost all the silver plate that Mary had.  She chatted with them and you can be sure they will receive e-mail invites to all her future Brocantes.  I asked her how she started this business which is known as Tinker, Tailor.  She worked for Yves St. Laurent as an accountant and hated it.  So, with an assistant, she parted ways with the company and voila, Tinker Tailor was born. 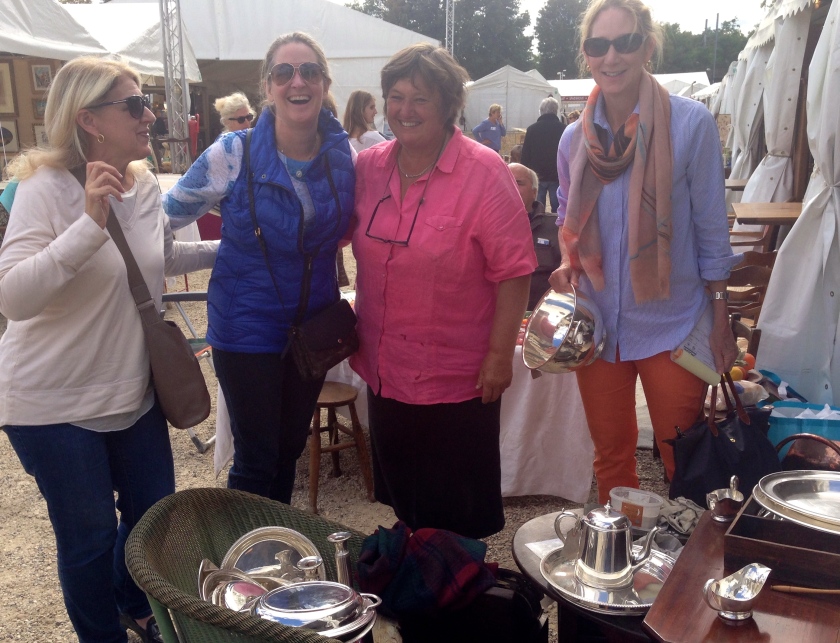 Jo is slightly older than Mary.  She can no longer do the heavy lifting that is required to move all the   around from Brocante to Brocante.  She has cut back on the amount of time she devotes to Brocantes.  I also asked her how she got started in the business.  As a child, her father would take her to auctions in the UK which he frequented.  He loved to buy frames.  She developed the bug.  After she finished her studies and married a frenchman, she worked for an antique dealer in Tours doing all the buying in the UK and the shipping around the world.  Some years later, she struck out on her own.  That was forty-six years ago. She loves pine.  She bought only large pieces and the French bought everything.  What she noticed, however, was that she liked sober pieces with straight lines whereas the French have a more sophisticated taste.  Perhaps a  little twirl here and there.  She pointed at a mirror that she wouldn’t have in her house because of the columns.  The French love it.

Both women had retail stores at one point in their lives but have given them up for the freedom of traveling or taking time off if need be.  Twelve years ago, Jo asked Mary if she would join her in her stall at Chatou.  They watch out for each other and get along fine.

And just for the record, I bought the Afghan rug that is hanging on the wall.  I adore Brocantes as do most Americans.  I told Jo that I’d never have been attracted to Bric a Brac sales. But,…well who knows.  I’m always looking for a good bargain.

One thought on “Brocante, Vide Grenier or Antiquités?”