She looked ancient. She sat on the sidewalk on Blvd St Germain des Pres in front of the Cluny museum. She had a small cat carrier to her side and a cardboard box covered with a cloth in front of her. When she smiled at me, I saw she had only two front teeth. Her face looked like a well-loved baseball glove. She wore a babushka on her head with a grey hairs straggling out all over.

I had stopped to look at her because she was holding a leash at the end of which, sitting on the cloth covered box, was a lean white cat. On the lap of this crone-like person were two very small kittens. Another two were in the cat carrier. Only one of the kittens was white like, what I presumed was the mother. One was an orange tabby, the third was a calico and the last little kitten was a tortoise shell known as a ‘trois couleur‘ in French. I had lost my Tortie, Samantha, the day before I left California to come to Paris. It was unexpected and had broken my heart. I still hadn’t recovered eight months later. When I see cats and kittens, I get a funny tummy. I want to grab them all up, hug them and take them home with me. 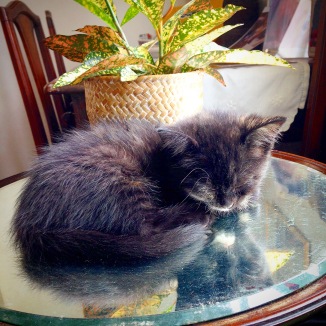 I turned to my friend, Joy, and said “I want her”. I was pointing to the little Tortie.
I asked the old woman, she must have been an SDF (san domicile fixe or homeless person), how much?
“Thirty-Five euros”
I pretended to misunderstand her and responded “thirty euros?”
She nodded yes. Then she gave me a big smile. Her face transformed from being crone-like to grandmotherly. I hadn’t known any of my grandmothers but I pictured them as smiling, warm and inviting.
There was absolutely no reason for me to negotiate with her. I had friends who had paid far more for kittens on the street. It’s a knee jerk reaction—bargain.

I stood in a moment of suspended time. ‘What am I doing?’ was the only clear thought that went through my head. I grabbed my friend’s hand, told the SDF that I was going to the distributeur to get some euros and off we went. I needed to buy some reflection time.

We went to Monoprix and I grabbed up kitty litter, food for kittens and whatever else I could remember that kittens needed. It had been a long time since I’d had one. As we left, I turned to Joy asking “Am I crazy?” I fully expected her to say yes. She didn’t.
“You’ve been talking about getting another cat ever since Samantha died. Maybe this is the right time”
What neither of us mentioned was that I had come to Paris for one year. That year had only four more months left. I had been intimating to everyone that I wanted to stay but had done nothing to set that in motion. It didn’t even occur to me then.

We went back to where the old woman was sitting. I was afraid she might have gone. I gave her thirty euros. She gave me a little seven week old kitten that flopped over like it was dead. I wrapped her up in my scarf and we walked to Starbucks. Joy went and got us coffees and I looked at this little being. 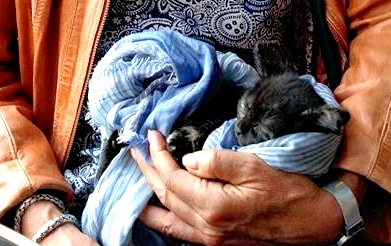 The next day, she and I went to the Vet which just happened to be around the corner from my apartment.  The Vet checked her thoroughly.  She was very clean, not one flea, ears and eyes perfect–in fact the Vet was surprised she came off the street!  I was so relieved.

She asked me her name. A name?  Usually a name comes right to me and that’s it but this time it took a week. The little kitten became Bijou.  Which means jewel in French.  The further adventures of Bijou, who was anything but for the first year of her life, will be in later installments of this blog

It was at least a month later that I realized that I had decided to stay in Paris at that moment.

4 thoughts on “Bijou the cat”