This morning, hurrying down my street, Git-le-Coeur, I found myself behind a very determined French woman.  She had large strides.  An older dog was following but she never turned around.  I kept looking at her, at the dog, wondering did they belong to each other, should I do something.  Suddenly she stopped.  She began tying black calla lilies to a grill at a store front.  I walked up next to her and suddenly realized which store front it was. 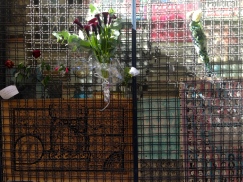 “The owner, he is alright isn’t he?” my french is a bit stilted but that’s how it came out.

“Cardiac arrest.  I feel black so I bought him black flowers”  and she strode away with that determined manner that only the french seem to pull off.  The dog, whom I had forgotten about, ran after her.

I started to cry.  I didn’t know the owner.  Yet almost every day for the past two years I’ve walked down Git-le-Coeur on an errand.  Every day I passed him and said “Bonjour Monsieur” or “Bonsoir monsieur” if it was after 8pm.  He always nodded and softly greeted me.  When friends would visit, we would walk past and I pointed out my beat friend that I’d never met. He always wore black.  He was always outside smoking a cigarette and reading.  If it was a hot day, he was across the street sitting on the curb in the shadow.  If it was a cool day, he would bring out one of those carrying sit-stools that has 3 legs and he would lean against it.  The windows of his store front were covered with bande-déssinée covers.  Animated stories that look like cartoon books but aren’t are the rage in France, always have been.  There wasn’t one empty space, even the door knob was a photo or a book cover. 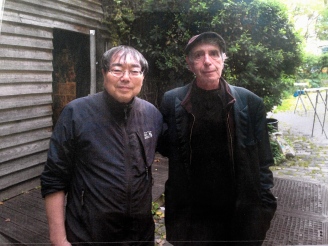 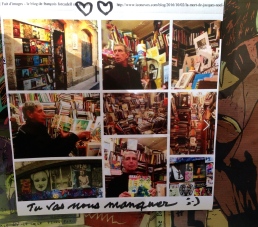 He must have lived above the store.  If I happened down the street at the right time, I would see him leaving the entrance to his apartment building which was next to his shop.  I’m guessing his apartment was right above the store. Colorful decorations that ranged from plastic flowers to pails to almost anything hung from the balcony.

I never knew his name.

There is no center of Paris.  Every arrondissement has its own neighborhood and each arrondissement has four quartiers.  I’ve lived in this neighborhood long enough that I know many of the characters.  I see the same homeless people every day.  I know all the cashiers at the Carrefour.  These people have become my people.  I never considered that one of them might leave…..permanently.  It was always going to be me leaving, returning to the United States or moving to another arrondissement.  I couldn’t get my brain cells to wrap around this piece of information.  My friend had left and wasn’t coming back.

I was late for a luncheon date with some classmates so I went to the metro thinking about him.  I had been pondering a little gift for him when I returned from California next month.  Now I would be pondering what I would have brought him, now that I know him better.

When lunch was finished, I hurried back to the store to photograph what was there. I read everything taped up or left by the front door.  I just couldn’t believe I would never see him again. 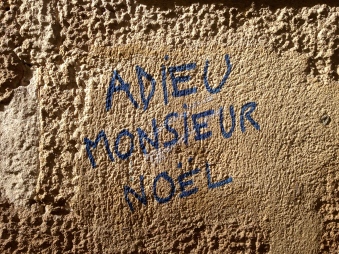 His name was Jacques Noel.  He was very well loved. 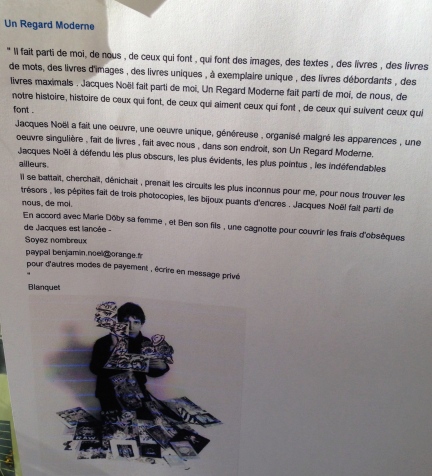 M. Jacques Noel when he was a young man.