Joan Baez.  Just saying her name conjures up civil rights, protest marches, Bob Dylan, folk songs, social justice, Vietnam and on and on.  Joan Baez is a National Treasure.  I should say International Treasure.  The Parisians adore her.

I was waiting for the metro one day last October and saw a huge poster advertising 10 days of Joan Baez concerts in June 2018.  The poster said it was her Fare Well Tour. I called my friend Barbara to see if she wanted to go with me.  Yes, indeed, she did.  So I bought tickets, made her put them in a safe place (I was afraid I’d forget where my safe place was) and last Sunday, we went to the Olympia in the 9th arrondissement to see and hear her.

I was fifteen years old when I went to my first Joan Baez concert.  My family had just returned from a year living in Geneva, Switzerland. Some new friends took me to an outdoor stadium in the suburbs of Philadelphia.  She mostly sang folk songs then and played only an acoustic guitar. I had two of her records and knew every song.  Halfway through the concert, she introduced us to a friend of hers she thought we all should know:  Bob Dylan.  That was the summer of 1963.

I bought a guitar and tried to learn without taking lessons.  I grew my hair long so I’d look like a real folk singer.  I had a good voice so my parents let me play a song at family gatherings even if I only knew three chords on the guitar.

Over the years, she came in and out of my life.  When the album Diamonds and Rust came out, a relationship had just ended.  I played that album over and over and over.  I still can’t hear Diamonds and Rust without picturing myself in that small apartment in Berkeley, Calif crying my heart out for a boy I deeply loved.

She got herself arrested at an anti Vietnam march and met David Harris, Peace Activist, who she married and had her son, Gabriel, with.  “I went to jail for 11 days for disturbing the peace; I was trying to disturb the war.” Joan Baez, 1967 (Pop Chronicles interview.)  Her passion inspired so many of us.  I probably went to two more concerts over the five years following.

Last Spring, I went on YouTube and watched a concert she had given herself for her 75th birthday (She is 77 years old now).  So she was in the foreground of my mind when I saw that poster.  I kept telling people that Joan Baez was my first ever concert and now here it was  55 years later and she could well be my last concert.  It is amazing to think that for 60 years, Joan Baez has been a beacon of social justice in the world and she has done it a lot through music.  I don’t think she has ever slowed down.

The Olympia is a lovely venue in the 9th.  It reminded me of the Paramount Theatre in Oakland, Ca but not as pretty.  There is probably not a bad seat in the whole place. I had gotten seats in the 2nd section of the Orchestra and we had tons of leg room.  After opening with Dylan’s Don’t Think Twice, It’s Alright, she played three or four songs I didn’t recognise.  Then she sang “It’s all over now, Baby Blue.” Out of nowhere I got tears in my eyes and I couldn’t stop them for the rest of the concert.  Every song from then on was an “oldie but goodie”.  Some her’s, some Dylan’s, one Woody Guthrie and one Pete Seeger.  I couldn’t tell you what I was crying about.  Maybe the rush of memories when I had such a passion for social justice (I still do but can’t often show up and do the footwork), for marching in protest of Vietnam and segregation. And maybe  a few tears because we had so much hope and nothing has changed, possibly it’s worse.

She sang two songs solo then brought out the rest of her “band”. Her son, Gabriel, a percussionist, and Dirk Powell playing so many different instruments, I stopped counting. Grace Stumberg, who has a strong country-like voice joined her for three songs and at the end for the encores.

Did I mention how much the Parisians love her!!  I could see why.  She spoke French as much as she could.  With each song, she told the audience, in French, what it was about.  They clapped at everything and, in the end, gave her a standing ovation making her come back out four times.  All ten shows sold out and five more were added in February 2019 (this FareWell Tour could well last a very long time.  No one wants to see her go).  I tried to buy tickets when I got home and all five dates were sold out.  I don’t think there is another city that had nearly this many performances.

I bought a good poster inside the Olympia then a cheapie outside on the street.  They are now hanging on the inside of the bathroom door. 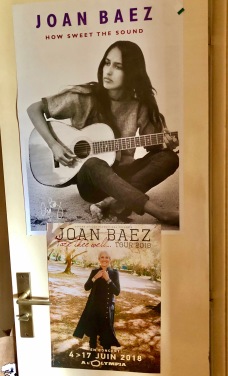 And for those of you who didn’t get to hear her but would love to, the Olympia has made it available to everyone. Enjoy and cry your own tears!!!

One thought on “Joan Baez in Paris”