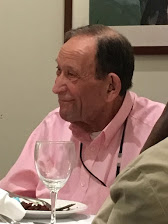 My uncle Stan was born in the Bronx the youngest of three children.  I never knew him until my family moved to Princeton, NJ in August 1963.  He and Enid, his beautiful wife from Newfoundland, had moved from Detroit the year before.  My father was a professor at the Woodrow Wilson School and Stan headed up the ROTC program and later Director of the Office of Personnel Services.

Stan and Enid were always StanandEnid.  You didn’t refer to one without the other.  Their e-mail address was ‘eandstan’.  To me, as a teenager, they were royalty.  They were Hollywood glamorous. They were Jack and Jackie Kennedy.  They were young and fun and, though I didn’t spend much time with them before I left for college, I always knew that there were two “normal” people in my family.

Enid was the person who kept in touch. Whenever I was in Princeton, she would invite me to dinner.  She loved to cook and would experiment trying her new recipes on me.  Though I didn’t reciprocate much, she always was interested in what I was doing.  There was never a doubt in my mind that she liked/loved me.  In 2012, a year after she had died, Stan and his three nieces (Joan, Robie, Sara) with one husband (married to Joan) went to St. Johns, Newfoundland to pay homage to Enid and the Goodyear family.

As I grew older, I realised how much Stan loved sports.  His true love was the Princeton men’s basketball team.  He founded the organisation Friends of Princeton Basketball and served as it’s secretary for many years.  I always thought of him as a Yankees fan mostly because he grew up in NY and I knew he wasn’t a Dodgers fan.  He told me a story of being stationed in Detroit when he was in the Army Air Force and going to Tigers games whenever the Yankees were in town.  Stan was a talker and very social so within a short time, they were waving him in and he would always go to “his” seat next to the Visitor’s Dugout.  He got to know a number of the players esp. Hank Bauer.   When he learned that he was being moved somewhere else, he went to the next Tigers/Yankees game to say goodbye. Hank Bauer came back 30 minutes later and said “Can you stick around?  The team would like to take you out to dinner.”  The first time he told me this story, his eyes got wide and he said “and there I was having dinner with Mickey Mantle, Phil Rizzuto, Yogi Berra…..”

Later into his Princeton years, the Athletic Department was having a search for a new director.  Stan got ahold of the list of candidates and saw they were all white men.  This was the end of  the 1970s.  Stan told the search committee “you can’t do that, you have to include people of color.” So they challenged him to find some good candidates.  Stan decided to call Bill White, ex-Pirate ballplayer, announcer for the Yankees broadcasts along with Phil Rizzuto.  He called the station and left a message saying who he was and why he was calling.  To his surprise, Bill called back that evening.  Not only did he help Stan find good candidates but they became fast friends.  Bill and his wife would come to Princeton and dine with Stan and Enid.  Bill also loved to cook and often went home with recipes.  One evening during a rain delay, Bill turned to the Scooter and said he had a great recipe Phil should try.  He proceeded to give him one of Enid’s recipes.  Back in Princeton, Stan and Enid, listening to the broadcast were grinning from ear to ear.

They lost track of each other in the 90s and early 2000s until I thought I would try and use my love of baseball muscle and find Bill.  I managed it and we all got together and slowly over the last 16 years they have gotten close again.  In the last seven months, Bill has made the drive over from Bucks County, Pa at least once a week to sit with Stan and chat.  As have many Princeton basketball players.  As have a number of retired staff who worked with Stan and loved him.  Stan was well loved and well respected.

Readers of this blog know that Stan fell and broke his hip November 17, 2017.  I had already scheduled to spend Thanksgiving with him so I arrived two days later to find a very disoriented Stan still in Princeton Hospital.  I’ve been told that once an older person falls, it is the beginning of the end.  He was 93 and 1/2 years old.  The surgeons only put two posts in his hip to keep the bones together.  He was too fragile for major surgery.

For seven months, Stan has been varying degrees of miserable.  He has been 100% dependent on others to get out of bed, to go to the bathroom and to be seated in his wheel chair.  He did do Physical Therapy and was building up strength in his upper body.  Every time I would visit, I’d ask “how are you, Stan?” and he was honest.  “I feel awful and this is just awful.”  According to two of his aides, he decided to stop eating and drinking and take matters into his own hands.  My cousin Joan was there over the weekend and says he was somewhat delirious, often mistaking her for her father, his brother Bernie.  She said it made her feel good that Stan thought his older brother was there in the end.

He passed at 6am on Monday morning.

I feel relieved.  I hurt for him being so miserable.  I felt powerless to change anything.  I could only be there as often as was possible.  I saw him towards the end of May and we both said “I love you.”

One thing you should know about Stan–he never got grey hair. Never!