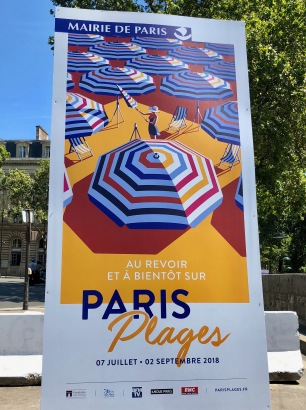 In 2002, the Paris Mayor Bertrand Delanoe, who was well-known for launching ambitious municipal events, decided that everyone has the right to go to the beach in the summer.  Not everyone can afford to go to the Cote d’Azur or Brittany or the West of France.  So beaches were brought to Paris.  For four weeks, sand lay on the quai of the right bank of the Seine from Hotel de Ville to Pont Neuf. It was so popular that it was brought back the next year.  By 2007,  4 million visitors were recorded.

This year, Paris Plages is lasting from July 7 (the first day of school vacation) until Sept 2. I walked down there today from Hotel de Ville.  I didn’t see any sand but all the umbrellas were up and lounge chairs were out with people sunning and reading. 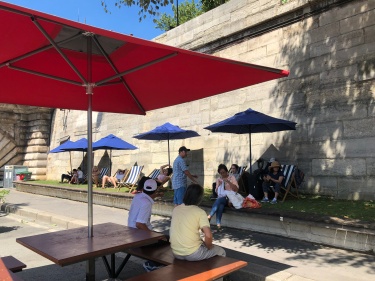 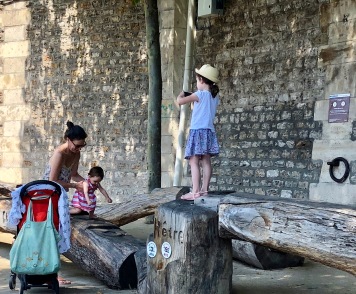 One of the reasons that the Paris Plages look different this year may be a political one. The beaches were built free of charge by LafargeHolcim from 2002 to 2017, when the city of Paris discontinued their contract in retaliation for LafargeHolcim’s proposal to build the wall on the Mexico-United States border promised by U.S. President Donald Trump. (Wikipedia) 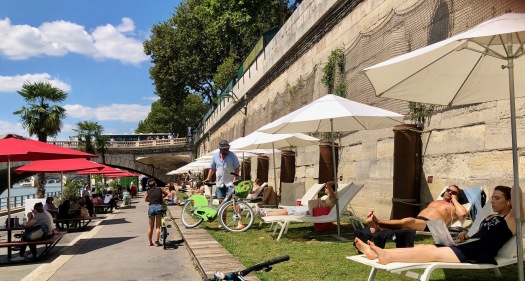 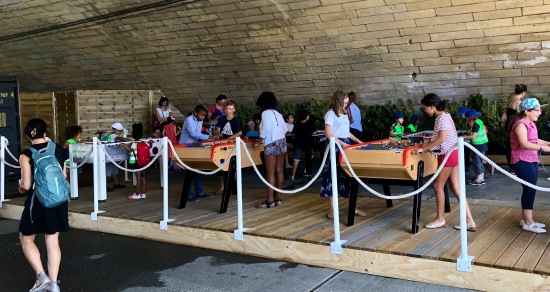 I don’t think the sunbathers or the children playing with the above games cared one way or the other.  School is out for the summer and they can all go to the “beach”. 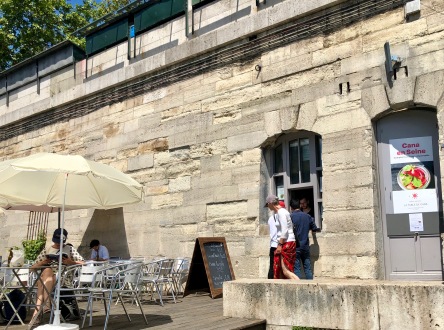 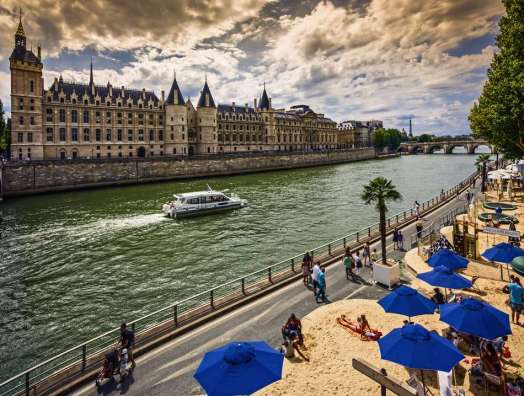 In  another part of Paris, at the “Bassin de la Villette” is another beach.  This one has three different pools.  Photos will have to wait until I return from Le Gers.  From TripSavvy:  Stretching from the Rotonde de Ledoux near the Jaurès Metro station to the former Magasins Généraux on Rue de Crimee, this is the beach to choose if you’d like to see a more contemporary side of Paris, and are interested in getting in the water. For water sports enthusiasts, the beach of choice will be at La Villette, where the Canal de l’Ourq affords participants a choice between a variety of relaxed water sports. Kayaks, pedal boats, sailboats, canoes, and more are open to the public at no charge until 9:00 p.m. with instructors on the scene to help ensure a safe experience. You’ll be able to glide along over 53,000 square feet of water, and after boating, a cold drink on one of the beach’s waterside cafes will be in order.

So those who can’t travel, summer at the beach has come to them!!!